Then Jesus came with them to a place called Gethsemane, and he said to his disciples, “Sit here while I go over there and pray.”  He took along Peter and the two sons of Zebedee, and began to feel sorrow and distress.  Then he said to them, “My soul is sorrowful even to death.  Remain here and keep watch with me.”  He advanced a little and fell prostrate in prayer, saying, “My Father, if it is possible, let this cup pass from me; yet, not as I will, but as you will.”  When he returned to his disciples he found them asleep.  He said to Peter, “So you could not keep watch with me for one hour?  Watch and pray that you may not undergo the test.  The spirit is willing, but the flesh is weak.”  Withdrawing a second time, he prayed again, “My Father, if it is not possible that this cup pass without my drinking it, your will be done!”  Then he returned once more and found them asleep, for they could not keep their eyes open.  He left them and withdrew again and prayed a third time, saying the same thing again.  Then he returned to his disciples and said to them, “Are you still sleeping and taking your rest?  Behold, the hour is at hand when the Son of Man is to be handed over to sinners.  Get up, let us go.  Look, my betrayer is at hand.” 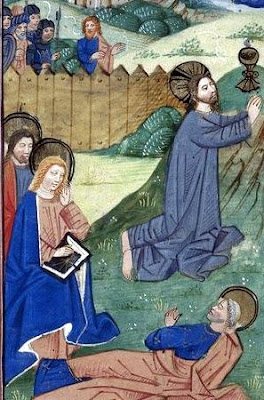 2.  The Scourging at the Pillar:  Jn 19:1
Then Pilate took Jesus and had him scourged. 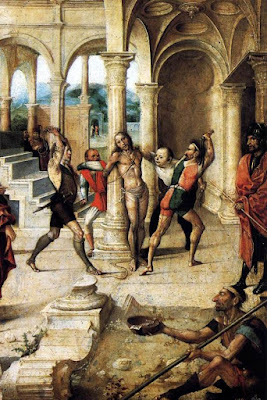 3.  The Crowning with Thorns:  Mt 27:29
Weaving a crown out of thorns, they placed it on his head, and a reed in his right hand.  And kneeling before him, they mocked him, saying, “Hail, King of the Jews.” 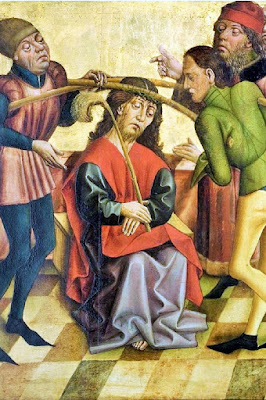 4.  The Carrying of the Cross:  Jn 19:16-17
Then he handed him over to be crucified.  So they took Jesus, and carrying the cross himself, he went out to what is called the Place of the Skull, in Hebrew, Golgotha. 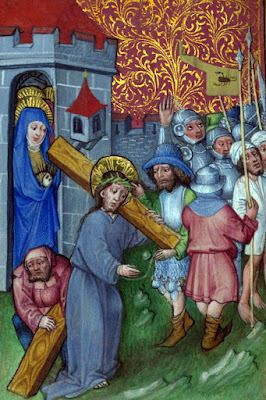 5.  The Crucifixion:  Jn 19:25-30
Standing by the cross of Jesus were his mother and his mother’s sister, Mary the wife of Clopas, and Mary of Magdala.  When Jesus saw his mother, and the disciple there whom he loved, he said to his mother, “Woman, behold, your son.”  Then he said to the disciple, “Behold, your mother.”  And from that hour the disciple took her into his home.
After this, aware that everything was now finished, in order that the scriptures might be fulfilled, Jesus said, “I thirst.”  There was a vessel filled with common wine.  So they put a sponge soaked in wine on a sprig of hyssop and put it up to his mouth.  When Jesus had taken the wine, he said, “It is finished.”  And bowing his head, he handed over the spirit. 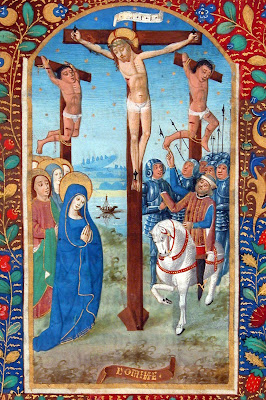