The Glorious Mysteries of the Rosary

When the Sabbath was over, Mary Magdalene, Mary, the mother of James, and Salome bought spices so that they might go and anoint him.  Very early when the sun had risen, on the first day of the week, they came to the tomb.  They were saying to one another, “Who will roll back the stone for us from the entrance to the tomb?”  When they looked up, they saw that the stone had been rolled back; it was very large.  On entering the tomb they saw a young man sitting on the right side, clothed in a white robe, and they were utterly amazed.  He said to them, “Do not be amazed!  You seek Jesus of Nazareth, the crucified.  He has been raised; he is not here.  Behold, the place where they laid him.  But go and tell his disciples and Peter, “He is going before you to Galilee; there you will see him, as he told you.”  Then they went out and fled from the tomb, seized with trembling and bewilderment.  They said nothing to anyone, for they were afraid. 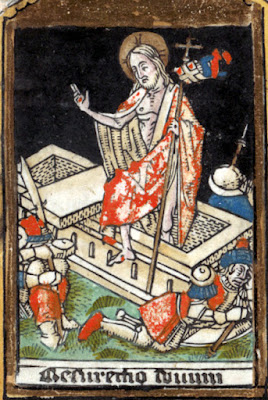 Then he led them out as far as Bethany, raised his hands, and blessed them.  As he blessed them he parted from them and was taken up to heaven.  They did him homage and then returned to Jerusalem with great joy, and they were continually in the temple praising God. 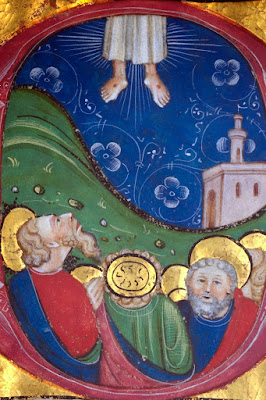 When the time for Pentecost was fulfilled, they were all in one place together.  And suddenly there came from the sky a noise like a strong driving wind, and it filled the entire house in which they were.  Then there appeared to them tongues as of fire, which parted and came to rest on each one of them.  And they were all filled with the Holy Spirit and began to speak in different tongues, as the Spirit enabled them to proclaim. 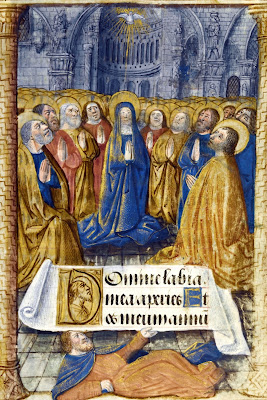 For you will not abandon my soul to Sheol, nor let your devout one see the pit. 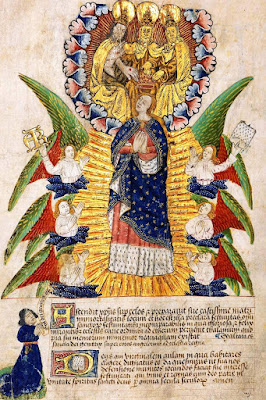 A great sign appeared in the sky, a woman clothed with the sun, with the moon under her feet, and on her head a crown of twelve stars.  She was with child and wailed aloud in pain as she labored to give birth. 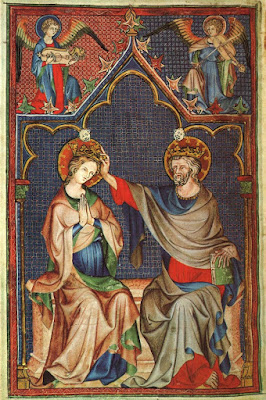 Back to the Rosary.

Holy Hour for the Annunciation

The Sorrowful Mysteries of the Rosary