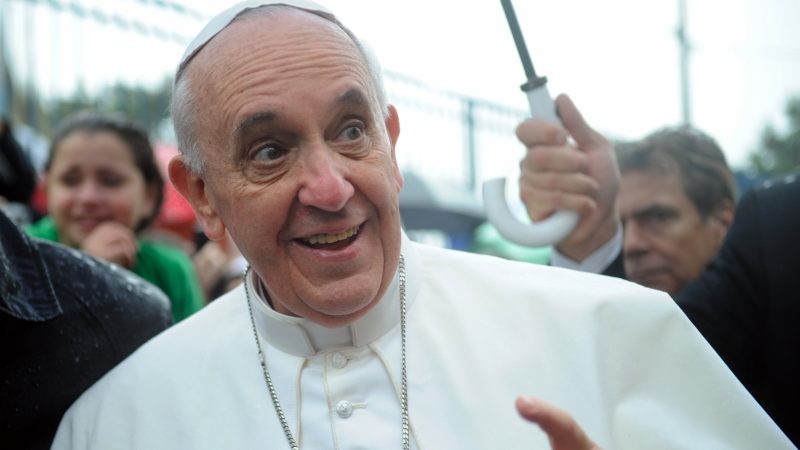 Yesterday Catholic and secular news media was abuzz with something Pope Francis said in a new documentary film about his pontificate made by Italian film maker Evgeny Afineevsky. In a segment addressing Pope Francis’ pastoral care for Catholics who identify as LGBTQ, the Pope is quoted as saying, “Homosexuals have a right to be a part of the family. They’re children of God and have a right to a family. Nobody should be thrown out, or be made miserable because of it,” and, “What we have to create is a civil union law. That way they are legally covered.” The latter statement is being taken by some as an endorsement of same-sex civil unions, which would contradict previous Vatican policy. Many news outlets are painting this as a major shift in Church teaching regarding homosexuality.

So what’s going on here?

First, its important to understand what the Catholic Church teaches about the pope and the special authority he holds in the Church. We believe that St. Peter was given special primacy among the Apostles by Christ and that this Apostolic primacy continues in the Bishops of Rome. We also believe that the pope teaches infallibly only in defining doctrine in matters of faith and morals to be held as definitive by all the faithful, when teaching ex cathedra (specifically invoking the papal office). In other words, it is a divine protection against promulgating error as truth when he acts as the universal teacher of the Church.

We do not believe the Pope receives divine inspiration, that he is God’s oracle or mouthpiece, or that he always makes the wisest and most prudent decisions. In other words, Catholics owe the pope a great deal of respect and obedience, but we do not idolize him.

This is important to keep in mind in the age of rapid-news and social media when everything the pope says is instantly reported and retweeted, and when those in the secular media tend to portray every papal remark as an official magisterial proclamation.

Usually the Pope exercises his authority using certain specific types of documents. You may have noticed that papal documents have odd sounding titles such as “Apostolic Exhortations” or “Encyclicals.” These terms refer to documents that carry different degrees of magisterial weight.

For example, an Apostolic Constitution is a very solemn church document dealing directly with matters of doctrine and promulgated as the law of the Church. A papal encyclical, on the other hand, is a pastoral letter where the pope expounds upon existing doctrine. An Apostolic Letter is like an encyclical, but is usually addressed to a specific group of people and offers counsel on a specific issue. It carries less magisterial weight. An Apostolic Exhortation is a papal reflection on a topic that has no legal or doctrinal authority.

Of course the pope can communicate using various other means, including speeches, homilies, interviews and even tweets. But these informal means of communication do not constitute acts of his magisterium and do not bind the consciences of Catholics.

The point to consider here is that remarks quoted in documentary films do not constitute magisterial teaching. If Pope Francis was going to announce a change in the teaching of the Catholic Church regarding homosexual unions, he would do so in an official ecclesial venue.

This brings us to another very important point, which is that the pope’s job – like all the bishops – is to preserve and clarify Church teaching, not to change it. That’s because we believe the teaching of the Church to have been revealed by God through Christ to the Apostles. Divine Revelation is not the private property of the bishops – not even the pope. The Church’s understanding of Revelation can and does deepen over time. But the content of the faith itself is not subject to change.

Pope Francis makes two statements about LGBTQ people in this documentary. The first is that “Homosexuals have a right to be a part of the family. They’re children of God and have a right to a family. Nobody should be thrown out, or be made miserable because of it.” This corresponds to established teaching of the Catholic Church regarding those with same-sex attraction.

The Church has clear teachings about sexual morality, and holds everyone accountable to these same teachings. The Church teaches that the purpose of the sexual act is both reproductive (the procreation of children) and unitive (for the good of the spouses) and that the proper context for the sexual act is within marriage, understood as a life-long and exclusive union. Actions contrary to the reproductive and unitive ends of the sexual act are morally sinful, including contraception, sex outside of marriage, adultery, masturbation, and homosexual acts. The Church teaches in the Catechism that homosexual acts are “contrary to the natural law” because they “close the sexual act to the gift of life” and “do not proceed from a genuine affective and sexual complementarity” (CCC 2357).

Regarding people who experience homosexual tendencies (same-sex attraction), the Catechism goes on to say:

This inclination, which is objectively disordered, constitutes for most of them a trial. They must be accepted with respect, compassion, and sensitivity. Every sign of unjust discrimination in their regard should be avoided. These persons are called to fulfill God’s will in their lives and, if they are Christians, to unite to the sacrifice of the Lord’s Cross the difficulties they may encounter from their condition. Homosexual persons are called to chastity. By the virtues of self-mastery that teach them inner freedom, at times by the support of disinterested friendship, by prayer and sacramental grace, they can and should gradually and resolutely approach Christian perfection.

To ostracize someone from your family because they experience same-sex attraction would be unloving and unjust, and Pope Francis is simply articulating established Church teaching when he says that homosexual people have a right to be part of a family.

But what about civil unions? The second statement Pope Francis makes in this documentary is, “What we have to create is a civil union law. That way they are legally covered.” This is the statement that generated so much controversy yesterday. This is because a previous official statement from the Vatican, issued by the Congregation for the Doctrine of the Faith in 2003 and approved by Pope St. John Paul II, states that “respect for homosexual persons cannot lead in any way to approval of homosexual behavior or to legal recognition of homosexual unions” (the document articulates various rational, social, legal and moral reasons why it comes to this conclusion).

But is Pope Francis voicing support for legal recognition of same-sex civil unions? It’s unclear. All we hear is this single sentence in the documentary, and it is not certain if the term Pope Francis uses in Spanish is equivalent to what we would understand “civil union” to mean in English. And what does “legally covered” mean in this context? It’s rather vague. Unless the Pope decides to issue a clarifying statement, we don’t really know what he’s referring to here.

It is likely that he means certain legal protections should be extended to those who participate in a shared life together – in terms of medical benefits and insurance, for example – without necessarily recognizing those relationships as being equivalent to marriage. As Archbishop Salvatore Cordeleone of San Francisco pointed out in a statement released yesterday, such legal protection “should be as inclusive as possible, and not be restricted to two people of the same sex in a presumed sexual relationship. There is no reason, for example, why a brother and a sister, both of whom are unmarried and support each other, should not have access to these kinds of benefits.”

If that is indeed the sort of legal protection the Holy Father has in mind, then it is clearly compatible with established Church teaching regarding the dignity and rights of the human person.

The above is written to clarify any confusion some may have about Pope Francis’ statements as reported yesterday. It is not my purpose in this post to go into detail about the Church’s teachings regarding marriage and human sexuality.

That being said, as your campus minister, I want to reiterate a few very important points.

If any student wishes to discuss issues they may be having regarding their own sexuality, I am 100% open to speaking with you in a loving, non-judgmental, and confidential environment. Just click on the “Meet with Deacon Matt” link to make an appointment to see me.

Finally, I also recommend the resources available through Courage International, an authentic Catholic ministry offering support for those experiencing same-sex attraction and their loved ones.

The Ordinary Work of Christians