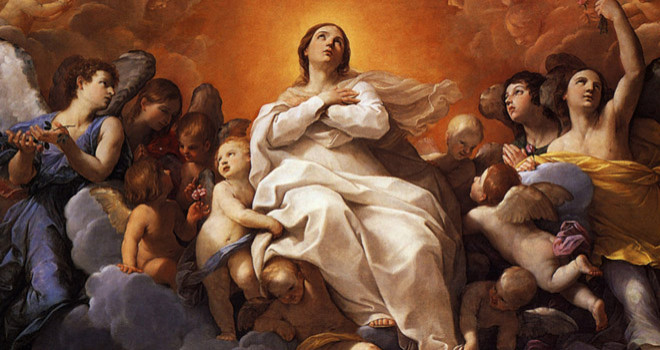 The Assumption of Mary

On August 15 each year, the Catholic Church celebrates the Solemnity of the Assumption of the Blessed Virgin Mary. It is one of only a few days of the year considered to be a holy day of obligation — meaning we are to treat it like a Sunday and celebrate by worshiping at Mass if at all possible. If you pray the Rosary, you may know the Assumption as the fourth Glorious mystery. But how much do you know about the Assumption, really?

On November 1, 1950, Pope Pius XII officially defined the dogma of the Assumption with these words:

“For which reason, after we have poured forth prayers of supplication again and again to God, and have invoked the light of the Spirit of Truth, for the glory of Almighty God who has lavished his special affection upon the Virgin Mary, for the honor of her Son, the immortal King of the Ages and the Victor over sin and death, for the increase of the glory of that same august Mother, and for the joy and exultation of the entire Church; by the authority of our Lord Jesus Christ, of the Blessed Apostles Peter and Paul, and by our own authority, we pronounce, declare, and define it to be a divinely revealed dogma: that the Immaculate Mother of God, the ever Virgin Mary, having completed the course of her earthly life, was assumed body and soul into heavenly glory.” — Munificentissimus Deus, 44

What this means in a nutshell is that Mary’s body was not allowed to corrupt in the grave. Instead, at the end of her earthly life, her body was assumed by God along with her soul into heaven where she enjoys now the glory of the resurrection that is the hope of every Christian.

How is this different from the Ascension?

Are there examples of others being assumed into heaven?

Yes. In the Old Testament, we are told that Enoch “walked with God, and he was seen no more because God took him” (Gen 5:24). We are also told that the prophet Elijah was taken to heaven in a fiery chariot (2 Kings 2:1-13).

Does the Bible say Mary was assumed into heaven?

Not directly. But St. John does report in his heavenly vision, recorded in Revelation, seeing “a woman clothed with the sun, with the moon under her feet, and on her head a crown of twelve stars” (Rev 12:1). This has traditionally been understood as a reference to the Virgin Mary.

No. The Pope officially defined the teaching in 1950. But that’s not the same as making it up. Belief in the assumption of Mary has been around since the earliest days of the Church. St. Ephraim the Syrian (d. 373 AD) wrote of Mary as having been glorified by Christ and carried through the air into heaven. By the end of the fourth century, the Assumption of Mary was celebrated with an annual feast day called the Dormition of Mary. In fact, the Assumption is the most ancient Marian feast. So when Pius XII officially defined the dogma in 1950, he was simply putting his papal stamp on something the Church had celebrated for a long time.

Catholics love relics. This is because Catholicism is an historical faith. By this I mean it is based on real historical events. Real people lived in real places, and left real remains. We make pilgrimages to visit these holy places, and we revere the physical remains of the saints. There is no holier saint than Mary, the Mother of God, and yet no one in the history of Christianity has ever claimed to have Mary’s relics.

You can visit the Tomb of Mary, where her body was reportedly laid to rest. But you will find no body there. Today, the Benedictine Abbey of the Dormition of Mary marks this historic spot.  But they don’t claim to have her relics. No church ever has.

In 451 AD, during the Council of Chalcedon, the Emperor Marcian asked the Patriarch of Jerusalem to bring Mary’s relics to Constantinople to be enshrined in the Roman capitol. He wanted the relics of the greatest saint to be housed in the greatest church of the Roman empire. But the patriarch of Jerusalem explained that while Mary had died in the presence of the Apostles in Jerusalem, that her tomb, when opened later, was found to be empty, and so the Apostles concluded that her body was taken up into heaven. (It was common in first century Jerusalem to open the tomb after the body had time to decay so as to collect the bones and place them in a smaller box called an ossuary).

Why would Mary be assumed into heaven?

The short answer is “by God’s grace.” Our Lord wants his blessed mother in heaven with him. Wouldn’t you? But the longer answer has to do with the Immaculate Conception, which Pope Pius XII references heavily in his 1950 proclamation. The Immaculate Conception is the Marian dogma stating that Mary was conceived without original sin. Why we believe this to be true is a topic for a different post, but as one of the consequences of original sin is to make mankind subject to death and bodily decay, it follows that if Mary did not suffer from original sin, she also would not have to suffer death and decay.

Does this mean Mary did not die?

We don’t know. Note that in the official definition of the Assumption, Pope Pius XII only says that Mary “completed the course of her earthly life.” He is intentionally silent on the matter of whether or not she died. Some traditions in the Church hold that she did not die, and was taken while still alive into heaven, like Enoch and Elijah. Other traditions hold that she did die a bodily death, but that after her death, her body was raised into heaven and so Mary experiences now the resurrection of the body that all Christians hope for at the end of time.

So if Mary did not suffer from original sin, why do some Catholics believe she died? It is out of a desire to be united fully with her son. Jesus was not guilty of any sin, and yet suffered death for our salvation. Mary wanted to be united to Christ in all things, even in his passion, and so willingly suffered a natural human death so that she could be raised to new life with her Son.

When did Mary die?

Again, we don’t know for certain whether she died or was assumed into heaven while still alive. And we do not know precisely when this happened. But tradition holds that Mary’s earthly life ended around the year 50 AD, around the same time the Apostles were gathered in Jerusalem for the council recorded in Acts 15.

Mary’s Assumption is celebrated in both the West and in the East in the Church. Below is a beautiful hymn for the Assumption from the Maronite Rite, celebrated principally in Lebanon. As you pray the words of this ancient hymn, reflect upon the fact that the glory God has granted to Mary, his blessed mother, is the same glory he desires to grant to you. What we experience in part, Mary experiences in full. Where we hope to dwell in heaven, Mary dwells now, interceding with her Son on our behalf.

Alleluia! O Mother who gave Life to us, petition on our behalf the Son who appeared from you: may he remove from us the blows of punishment, and keep away divisions and disputes. May he lead us in the path of life in which we journey at all times. On your memorial day, we sing praise to your only Son.

Alleluia! Blessed are you, O Mary, for God, who feeds all creatures, was nourished by you and rested on your breast. O Wonder! The Son of God was nourished by a human creature! He assumed what is ours and gave us what is his. On his mother’s memorial let us proclaim: Glory to you, O Lord.

Alleluia! On your memorial day, O Blessed Mary, angels and mortals are overwhelmed with joy. The dead rejoice in their tombs because of the glory in creation. God will bless those who celebrate your memory with faith and pour his mercy upon them.

Alleluia! Who is to see a new ship sustaining the One who is mighty; the One who sustains and rules all creation. Mary bore him, yet he bears all creation. He nourishes all living creatures, yet she nourished him with her milk. He is the Maker of all infants, yet he dwelt, as an infant, in her womb. The fiery beings in the heights sing hymns of praise to him! Alleluia!