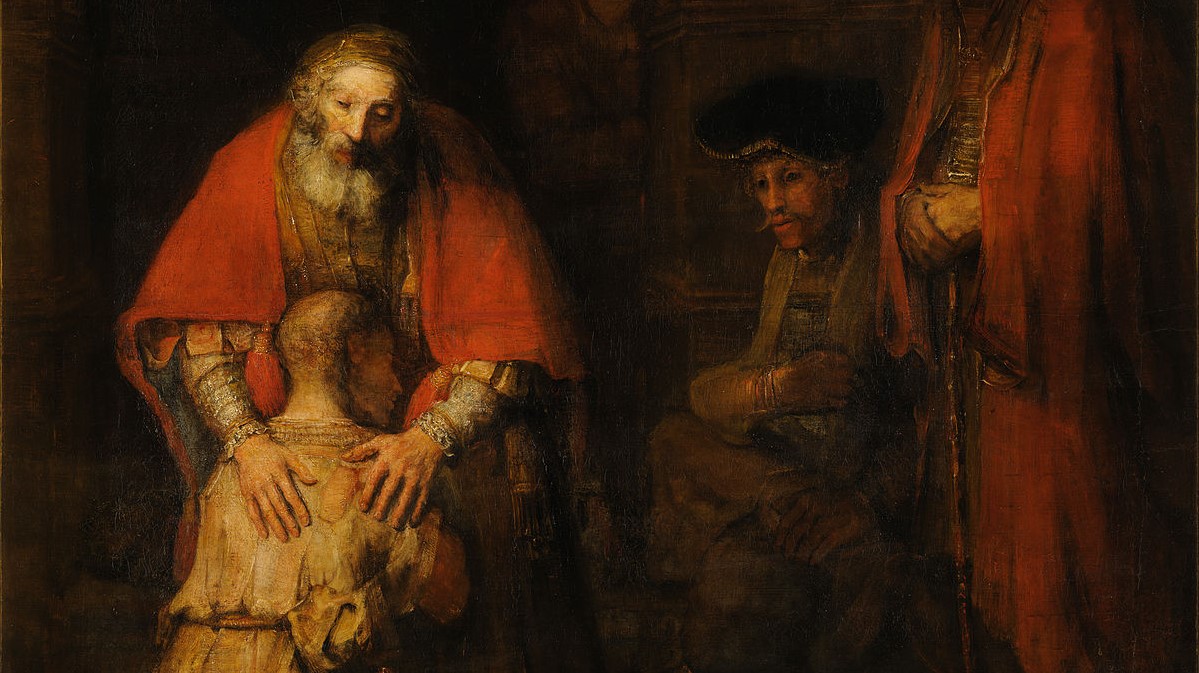 All three parables given in this Sunday’s gospel seem a little ridiculous when you stop to think about them. First we are told the parable of the Lost Sheep, when Jesus asks, “Who having a hundred sheep, and loosing one of them, would not leave the ninety-nine in the desert to look for the one who is lost?” (cf. Lk 15:4). No one, that’s who! That’s a good way to loose the other ninety-nine sheep! The second parable is about a woman who gets so excited over finding one lost coin that she throws a party, no doubt spending more than the value of the coin that she found. Jesus knows that the people in these parables seem ridiculous, and that’s the point. He’s trying to show us just how much our Father loves us and wants us to come back to him when we go astray. God is willing to go to seemingly ridiculous lengths to welcome the sinner home.

Nowhere is this expressed better than in the parable of the Prodigal Son. With this parable, Jesus offers great insight into the ridiculously merciful heart of our heavenly Father.

We see this from the very beginning of the story. When the son asks for his share of his inheritance, the father gives it to him. That alone is an almost foolishly generous act. Who would do such a thing, except for one whose nature it is to give without counting the cost?

But the son wastes all that he is given. And isn’t this what sin is at its heart? Sin is not merely breaking God’s law, or offending God’s sensibilities. You can’t bruise God’s ego. Sin is sin because it is a waste of the good things that God gives us. What good things? Everything! Everything we have is a gift from God, including our bodies and our souls, which are incomprehensibly good because we are made in God’s very image! Each one of us has been given more than we deserve, like the son in the story. Are we putting it to a good purpose, or are we wasting our Father’s inheritance? Sin is when we say to God, “Thanks, but no thanks, I’ll spend my inheritance on dissipation even if it means living with the swine.” That’s not the life God wants for us. We hurt ourselves when we sin, even if it feels like we are acting in our own self-interest.

I dwell on this point because before we can really appreciate the Good News we have to accept the Bad News. We are sinners in need of forgiveness. The first reading this Sunday from Exodus tells of the Golden Calf incident (Ex 32:7-11, 13-14). God had just led the people of Israel out of slavery in Egypt, performing miracles all along the way, and promised to make them a people of his very own. Their response? They turned away from the true God who freed them and began to worship a false god of their own making instead.

We repeat this pattern so often, turning our minds and hearts away from the real goodness of God and setting them on lesser gods of our own making. Our false gods can take many forms — fame, riches, academic success, leisure, comfort, sex, alcohol, social media, video games and pop ideologies — even good things become idols when we prioritize them over God and the goodness he is calling us to.

St. Paul admits in the second reading that he was once a blasphemer and an arrogant persecutor (1 Tm 1:13), even though he was acting in ignorance when he was persecuting Christians. His ignorance may have made him less culpable, but it did not make the evil he performed into something good. Before Paul could accept God’s forgiveness, he needed to realize the sin he had committed and change his ways. This is the meaning of repentance — identifying a sin, a false god we idolize, for the purpose of turning away from it and back to the true God. Only by doing this could Paul become the saint God was calling him to be.

Back to the son in our story. He realizes his misdeeds when he finds himself among the swine (considered the dirtiest animal by the Jewish people) wishing he could eat their food. He realizes that even the servants in his father’s house have it better than he does, so he decides to make a change. It is the first wise decision we see him make. He decides to get up and go to his father.

Now here is where I want to focus on the father’s point of view. We are told in the parable that “while he was still a long way off, his father caught sight of him” (Lk 15:20). That’s an important detail. He didn’t sneak up and catch the father by surprise. The father saw him from a distance. That means the father was looking for him. The father still had eyes for his son even when he was far away. You and I may stray very far from God when we sin, but that doesn’t mean God stops loving us. He never stops looking for us, scanning the horizon for the first sign of our return.

When the father catches sight of his wayward son returning, what does he do? He runs to him, embraces him, and kisses him (Lk 15:20). I’ve been told (and I don’t doubt that it is true) that only boys ran in ancient Jewish society. For a grown man to run, except in cases of urgent need, would have seemed foolish. But that’s how urgently the father wanted to embrace his son — he was willing to look foolish if it meant meeting him even a few seconds sooner. And as soon as he does, before the son says a single word, he is welcomed with embraces and the kiss of peace.

The son begins his confession saying, “Father, I have sinned against heaven and against you…” (Lk 15:21) but before he has the chance to complete his practiced speech, the Father sends word to his servants to dress his son in robe, ring and sandals (all signs of sonship in the household) and to slaughter the fattened calf. “Then let us celebrate with a feast, because this son of mine was dead, and has come to life again; he was lost and has been found” (Lk 15:23b-24).

Friends, this is Jesus’ best illustration for us of what happens when we go to confession. Each time we confess our sins to God — each time we rise and go to our Father — God throws a party in heaven! Believe me, He is more eager to welcome us back than we are to return!

This is why it makes no sense for us to feel shame when we go to confession. We should feel shame when we sin, not when we repent. To repent from sin is to return to our right minds, to return to reason, to return to the Father who loves us. Sometimes we might feel ashamed about what the priest might think of our sins. There is no need. I guarantee you he’s heard it all before. Our sins seem embarrassing to us because they are ours, but ask any priest and he’ll tell you that sin is pretty boring. Nothing you will confess will shock any priest that’s been ordained more than five minutes.

I also guarantee you that no priest has ever seen someone come into the confessional and thought to himself, “I didn’t know they were a sinner!” We all are sinners. When you enter the confessional, the priest thinks rather, “That person is repenting from sin,” and that is a cause for joy.

Some people misconstrue confession as an obstacle between us and God. Nothing can be further from the truth. Sin is an obstacle between us and God. In the sacrament of confession, God removes that obstacle, through the instrument of his priest speaking the words of absolution. Our loving Father runs out to meet us on the road, embraces us, kisses us, and puts his ring on our finger, reclaiming us as his beloved sons and daughters. It may seem ridiculous how much God loves us and how much he’s willing to forgive; but that’s how merciful is the heart of our heavenly Father.

In All Things Give Thanks