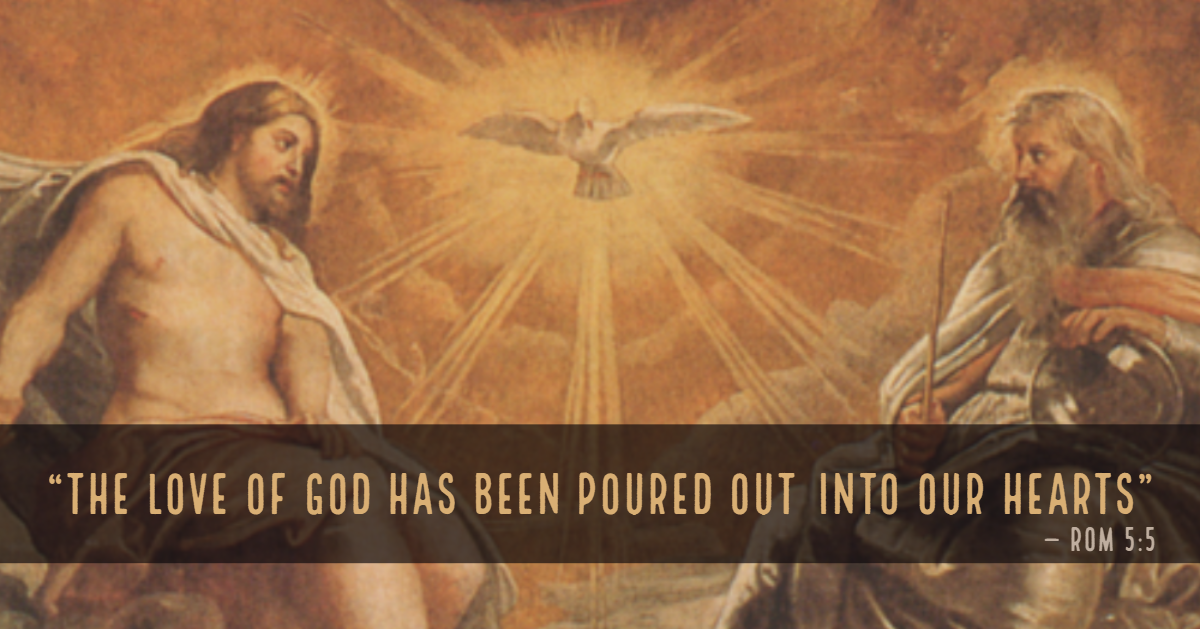 You, Me and the Trinity

Solemnity of the Most Holy Trinity

Belief in the Trinity is a bedrock doctrine of Christianity. We become members of the Church by being baptized in the name of the Father, the Son, and the Holy Spirit. We bless ourselves in this same triune name. We invoke the Trinity each time we pray. The belief that God is three Persons sharing the same divine and eternal being is what makes Christianity distinct from all other monotheistic religions. But what does it matter?

Identity: Made in God’s Image

In revealing himself as Trinity, God has given us a glimpse into the divine nature. In so doing, God also reveals a deep truth about humanity. We are made in God’s image (Gen 1:27) so understanding the nature of God allows us to discover our true identity. The doctrine of the Trinity teaches us that relationship is a fundamental aspect of God’s being.

It makes sense if you think about it. The Scriptures teach us that “God is Love” (1 Jn 4:7). But love can’t exist in isolation. Love requires a lover and a beloved. It exists by being given and received. When we say that “God is Love” we mean that God has all this within his very being — the gift, the giver, and the recipient.

One way I have seen the Trinity described is as “the Lover, the Beloved, and the Love shared between them.” This may be overly simplistic in theological terms, but it helps us to understand the living dynamic of the Trinity. God the Son is Logos (Word), the perfect image of God the Father. The Father knows the Son perfectly, and in knowing him, loves him. Likewise the Son offers himself back to the Father in love. The Holy Spirit is that love shared between them.

Because the Father, Son and Holy Spirit share the same being, they have all things in common. As Jesus says in this Sunday’s gospel, “Everything that the Father has is mine” (Jn 16:15). Theologians such as St. Augustine and St. Thomas Aquinas teach that the only thing that distinguishes the three Divine Persons from each other is their relationship to one another. They are each substantially the same (sharing the same substance) but relate to the other two as other.

Male and Female He Created Them

What does this mean for our identity as people made in God’s image? If we had been made in the image of a unitarian God, perfect in his Oneness, then our identity would be found in isolation. But this is not the case. On the contrary, one of the first things the Scriptures tell us about human nature is that “it is not good for the man to be alone” (Gen 2:18).

The Scriptures tell us, “God created mankind in his image; in the image of God he created them; male and female he created them” (Gen 1:27). Our sexual identity is therefore part of how we image God. Sex is not an accident (in the philosophical use of that term) of our biology, like height or weight, or the color of our eyes, hair or skin. Maleness or femaleness is fundamental to our nature. Our sexuality tells us that we are called to relationship and our particular gender informs how we are to relate to others — not just conjugally, but in all human relationships.

But not just any other will do. The self-gift of love requires an other capable of receiving this self-gift. It requires substantial equality. As the Image of the Father, the Son shares in the Father’s divine substance. The Father beholds the Son as one who is substantially the same yet at the same time other. This enables the Father and Son to love one another with a perfect and substantial love — the Holy Spirit. This sameness yet other is what makes the mutual self-gift of Trinitarian love possible.

As beings made in the image of the Trinity, we are also called to give ourselves in love to one who is the same and yet other. This is why in the second creation account in Genesis, Adam is not fulfilled by his relationships with the animals God made. “[N]one proved to be a suitable partner for the man” (Gen 2:20).

So God formed woman from man’s side, and when he saw her, Adam said, “This one, at last, is bone of my bones and flesh of my flesh” (Gen 2:23). In Eve, Adam recognizes someone who is substantially the same and yet other. This equality in complementarity is what makes it possible for men and women to give themselves to the other and to receive the other as self-gift.

Last week, the Vatican Congregation for Catholic Education issued a document entitled Male and Female He Created Them, dealing with the subject of gender theory in education. It addresses the problems that arise from an anthropology that “cancel[s] out the differences between men and women, presenting them instead as merely the product of historical and cultural conditioning” (paragraph 1), and outlines “the Christian vision of anthropology [that] sees sexuality as a fundamental component of one’s personhood” (paragraph 4), calling masculinity and femininity “the clear sign of the interpersonal communion in which man fulfills himself through the authentic gift of himself” (paragraph 32).

There is a need to reaffirm the metaphysical roots of sexual difference, as an anthropological refutation of attempts to negate the male-female duality of human nature, from which the family is generated. The denial of this duality not only erases the vision of human beings as the fruit of an act of creation but creates the idea of the human person as a sort of abstraction who chooses for himself what his nature is to be.

Male and Female He Created Them, paragraph 34.

We are creatures made by God. We don’t create ourselves. This makes our identity something to discover, not something to invent. A significant source of the general angst and discontent plaguing today’s society is the loss of our sense of identity. We no longer recognize God in ourselves or in others and therefore we are unable to relate to ourselves or others as we should. A rediscovery of Christian anthropology — that we are made by God and therefore our identity is to be found in God — is essential to heal the woundedness of our society and of our hearts.

A Love Poured Out

The doctrine of the Trinity is important because we are made in God’s image, and by coming to know God we come to know ourselves. The Trinity teaches us that we are made to be in relationship and that we can find ourselves only by giving ourselves in love. It is in the Trinity that we discover the true meaning of love as self-gift.

By calling us to communion with him, God calls us to participate in this Trinitarian love. By making us in his image, God has made us “other selves” that he can give himself to. By becoming human he has become for us an “other self” — bone of my bones and flesh of my flesh — to whom we can make gifts of ourselves.

St. Paul says in this Sunday’s readings, “the love of God has been poured out into our hearts through the Holy Spirit that has been given to us” (Rom 5:5). The Holy Spirit God gives us is nothing other than the love shared between the Father and the Son. Possessing this Spirit, we are capable of returning God’s divine love back to him, and sharing that divine love with others. When Christians give themselves to one another in love, they give not themselves only but God. In this way human love is perfected as it returns to its origin in God. As the hymn says, “They will know we are Christians by our love” (cf. Jn 13:35).

As men and women made in God’s image, let us enter into the deep mystery of the Trinity so that we may become icons of Divine Love in the world.