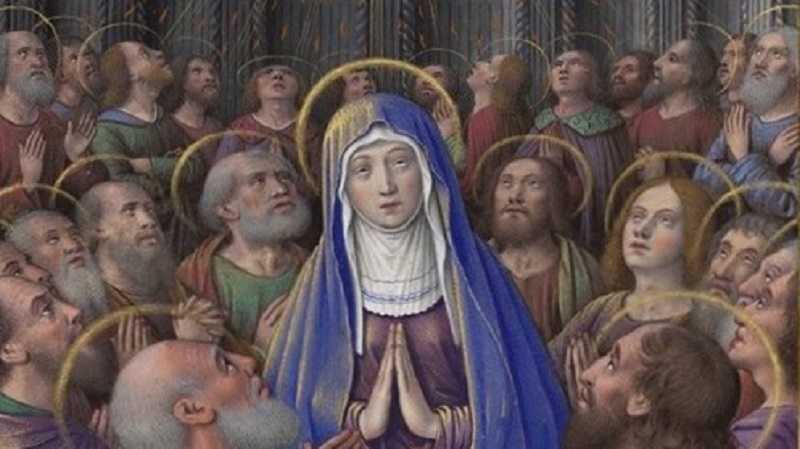 The gospel reading for today’s memorial may at first seem strange. When we think of gospel passages dealing with Mary, we probably think of the early parts of Luke’s gospel, when we read about the Annunciation of the angel Gabriel to Mary (Lk 1:26-38), or Mary’s visitation to Elizabeth when she proclaims her Magnificat (Lk 1:39-56). Instead, the gospel reading the Church offers on the Memorial of Mary, Mother of the Church, tells of Jesus’ crucifixion.

Standing by the cross of Jesus were his mother and his mother’s sister, Mary the wife of Clopas, and Mary of Magdala. When Jesus saw his mother and the disciple there whom he loved, he said to his mother, “Woman, behold, your son.” Then he said to the disciple, “Behold, your mother.” And from that hour the disciple took her into his home. After this, aware that everything was now finished, in order that the Scripture might be fulfilled, Jesus said, “I thirst.” There was a vessel filled with common wine. So they put a sponge soaked in wine on a sprig of hyssop and put it up to his mouth. When Jesus had taken the wine, he said, “It is finished.” And bowing his head, he handed over the spirit.

Now since it was preparation day, in order that the bodies might not remain on the cross on the sabbath, for the sabbath day of that week was a solemn one, the Jews asked Pilate that their legs be broken and they be taken down. So the soldiers came and broke the legs of the first and then of the other one who was crucified with Jesus. But when they came to Jesus and saw that he was already dead, they did not break his legs, but one soldier thrust his lance into his side, and immediately Blood and water flowed out.

We may think that this passage was selected because of the account of Christ giving his mother to John, and by extension the rest of the Church. But there is more to it than that. If that were the only thing we were meant to take from this gospel on today’s feast, the reading would have ended there with verse 27. Instead it continues another seven verses, giving us the full account of Jesus’ death on the cross, and how the Roman soldier thrust a lance into his side before taking his body down.

This is significant. The blood and water that poured fourth from the side of Christ on the cross have traditionally been seen as symbolic of Baptism and the Eucharist, the sacraments of new life. Salvation is found by washing in the waters of Baptism and in the Blood poured out by the Lamb of God. It is from this spring of living water that the Church is born.

There is a parallel between the Church being born from the wounded side of Christ and the creation of Eve from the side of Adam in Genesis. Eve was created to be Adam’s bride — his helpmate. Christ is the New Adam and his bride is the Church. Just like Adam’s bride, Christ’s bride is created from his side as he slept on the cross. Christ’s Bride, the Church, is “bone of his bone and flesh of his flesh” (cf. Gen 2:23). And so the Church is not only the Bride of Christ — she is also the Body of Christ.

Christ’s body was born of the Virgin Mary. If we are part of his Body — which is what happens when we are baptized into the Church — then Mary is our mother, as well.

So it is only fitting that in his final moments, Christ the Son should point us toward his mother, the woman in whose womb his body was formed, and say, “Behold your mother.”

St. Aelred was a British abbot who lived during the 12th century. He was the steward of King David of Scotland before joining a Cistercian monestary. He is famous for writing many spiritual treatises, especially The Mirror of Charity and On Spiritual Friendship. In a sermon delivered on the feast of the Nativity of the Blessed Virgin Mary, St. Aelred says that everyone in the Church should honor Mary as their mother.

We owe her honor, for she is the mother of our Lord. He who fails to honor the mother clearly dishonors the son. Also, Scripture says: Honor your father and your mother.

Once we lay in death, as you know and believe, in sin, in darkness, in misery. In death, because we had lost the Lord; in sin, because of our corruption; in darkness, for we were without the light of wisdom, and thus had perished utterly.

But then we were born, far better than through Eve, through Mary the blessed, because Christ was born of her. We have recovered new life in place of sin, immortality instead of mortality, light in place of darkness.

St. Aelred rightly calls Mary the mother of those who have been reborn in Christ. To be reborn in Christ is really to be born again as Christ as we “put on Christ” (Gal 3:27) and become members of his Body so that we can say with St. Paul, “It is no longer I who live, but Christ who lives within me” (Gal 2:20).

To be saved is to be one with Christ. Jesus Christ rose bodily from the dead and ascended bodily into heaven. If we also wish to rise from the dead and ascend into heaven then we must be united with his Body, the Church. There is no other way. God has only one begotten Son. To be adopted children of the Father means to share in Christ’s Sonship. If we want to have God as our Father, and Christ as our Brother, that means we must have Mary as our Mother.

It is fitting therefore that on this day after Pentecost, when the Holy Spirit descends as a mighty wind to breathe life into the Church, that same Church should celebrate the Mother who gave birth the Body of which we are blessed to be members.

O God, Father of mercies, whose Only Begotten Son, as he hung upon the Cross, chose the Blessed Virgin Mary, his Mother, to be our Mother also, grant, we pray, that with her loving help your Church may be more fruitful day by day and, exulting in the holiness of her children, may draw to her embrace all the families of the peoples. Through our Lord Jesus Christ, your Son, who lives and reigns with you in the unity of the Holy Spirit, one God, for ever and ever.

Collect Prayer for the Memorial of Mary, Mother of the Church