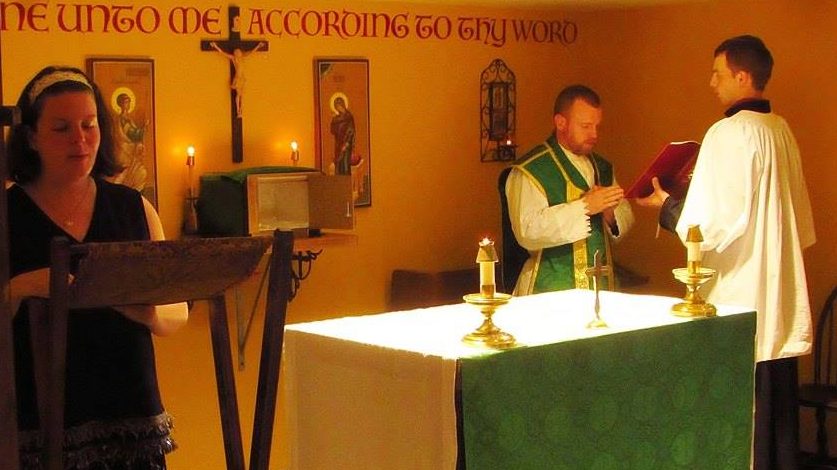 Who Owns the Liturgy?

In our ongoing study of the upcoming changes to the Mass which go into effect the First Sunday of Advent this year, we began by looking at some fundamental principles. The first principle we looked at was simply that “words matter.” The second principle is that the Liturgy belongs to us. But it does not belong to us.

That is why a prayer such as the rosary is not considered liturgical. It’s a private devotion, not a public work of the Church. So we have some room there for individualization. You might like to recite the St. Michael the Archangel prayer at the end of the rosary. Perhaps I don’t. That’s ok. We can pray our rosaries in different ways and that’s fine when we pray them by ourselves as individuals.

But there is no such leeway with liturgical prayer, because it is not a private devotion that we offer only on our own behalf. It is the public work of the Church and any time we participate in the liturgy we are praying along with the entire Church. And I do not simply mean the Church here on earth, but those with whom we are united in heaven, as well. Pay attention at Mass next time before we sing the Sanctus and you’ll note that we are joining in that hymn of praise along with the angels and choirs of heaven.

So the Mass is no one’s private property; though sometimes people are tempted to treat it as such. Whenever we do that it causes division, and we always end up missing something important.

On the surface, one could ask, what’s wrong with that? After all, the difference is minor, and it does not really change the overall meaning of the prayer. But here’s the thing — that’s not how the Church is instructing us to respond at that moment. When we choose to respond in a different way, we are making a decision to ignore what the Church is asking us to do in the liturgy and instead substitute our own will. We are saying, “I know better than the Church.”

In this particular case we are assuming that by referring to God with a masculine pronoun we are continuing an archaic and outdated tradition of thinking of God in anthropomorphic terms which reflect an oppressive patriarchal society, designed to keep women in their place. After all, God is neither male nor female, so why should we refer to God as “Him”?

Except that the Church has always taught us to refer to God as “Him.” And rather than decide on our own, based on our oh-so-superior understanding, we ought to reflect on what the Church might be trying to teach us with her words.

Did you notice I just wrote, “her words?” Just as the Church has always referred to God as masculine, she has always referred to herself as feminine, as in “Holy Mother Church” or “The Bride of Christ.” These are metaphors we are all familiar with. Yet no one is attempting to transmorph those phrases into “inclusive” language. Can you imagine “Holy Parent Church” or “the Spouse of Christ”? It sounds ridiculous.

So why does the Church refer to God as masculine and herself as feminine? Neither one is a being with a sexual nature that exists as male or female. Obviously it is a metaphor. So the thing to ask is what does that metaphor teach us?

What an absolutely marvelous metaphor to describe our relationship to God. We are all female in relation to Him. He is the one who gives. Our role is to receive God’s gift of Himself into our bodies, into our hearts, our minds and our souls.

When we refuse to refer to God using the masculine pronoun we are robbing ourselves of this rich way of describing our relationship with Him. And further, when we make the decision on our own to change the words of the liturgy, we are setting ourselves up as the arbiter of how the Church ought to do things, and that is a dangerous position in which to be. It sows the seeds of disobedience.

How Covid-19 is effecting Mass on Campus