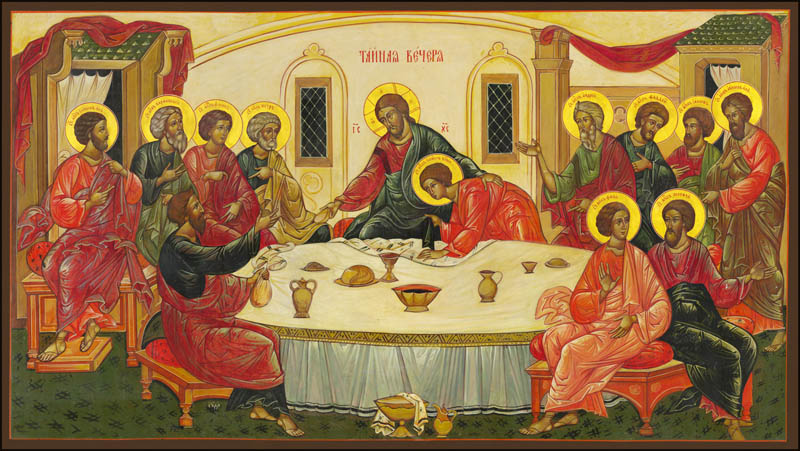 The more things change, the more they stay the same…

Our preparation for the new translation of the Mass we will begin using this Advent is a good occasion for us to look back and reflect upon the history of the Mass itself. The Mass is something that has been with us since the beginning of the Church. Indeed one cannot separate the life of the Church from the Eucharist. This is why the Second Vatican Council calls the Eucharist “the source and summit of our faith.” In the days leading up to his Passion, Jesus instituted the priesthood and the Eucharist during the Last Supper on Holy Thursday.

We are all familiar with the words. From Luke’s Gospel we read, “He took bread, and when he had given thanks he broke it and gave it to them, saying, ‘This is my body which is given for you. Do this in remembrance of me.’ And likewise the cup after supper, saying, ‘This cup which is poured out for you is the new covenant in my blood.’”

This celebration of the Body and Blood of Christ was performed reverently by the very first Christians. The book of Acts speaks of the first converts “attending temple together and breaking bread in their homes.” In other words they heard the Word of God preached in the Synagogue and followed that with the new Christian celebration of the Body and Blood of our Lord — the liturgy of the Word and the liturgy of the Eucharist, the two elements which together make up our Mass today.

It has been so from the beginning. We have testimony to this from some of the earliest Christian writers. St. Justin Martyr wrote about the Mass around the year 155 AD. He had found in his travels that there was widespread misconception and confusion over what Christians do and what they believe. So he wrote an Apologia, which was a rational defense of the Christian life. He wrote:

On the day called Sunday, all who live in cities or countryside gather in one place, and the memoirs of the apostles or the writings of the prophets are read, as long as time permits. Then, when the reader has finished, the president instructs and exhorts them to imitate these good things [“president” comes from presbyter which is where we get our word “preist”]. Then we all rise together and pray… When our prayer is ended, bread and wine with water are brought forth, and the president offers prayers and thanksgivings, according to his ability. The people assent, saying “Amen”; and there is a distribution to each of the Eucharistic elements. The deacons carry a portion to those who are absent. Those who are able give willingly whatever sum they each think appropriate. The money collected is deposited with the president.…

Those of us familiar with the Mass can easily see patterns we are familiar with. We see the readings of sacred texts. We see the homily. There is even a collection! And central to it all is the Eucharist. In an earlier part of his Apologia, St. Justin writes:

[B]read and a cup of wine mixed with water are brought to the president of the brethren. Taking them, he gives praise and glory to the Father of the universe, through the name of the Son and of the Holy Spirit, and he offers thanks at considerable length that we have been counted worthy to receive these things from his hands.

When he has concluded the prayers and thanksgivings, all the people present express their assent by saying, “Amen.” This word is Hebrew for “so be it.” And when the president has given thanks, and all the people have expressed their assent, those whom we call deacons distribute to each of those present a portion of the bread and the wine mixed with water, over which the thanksgiving was pronounced. To those who are absent, they carry away a portion.

This food we call the Eucharist, and no one is allowed to partake but the man who believes that our doctrines are true, who has been washed with the bath of remission of sins and rebirth, and who is living as Christ has commanded.

We do not receive these as common bread and drink. For Jesus Christ our Savior, made flesh by the Word of God, had both flesh and blood for our salvation. Likewise, we have been taught that the food blessed by the prayer of his word – and from which our own blood and flesh are nourished and changed – is the flesh and blood of Jesus who was made flesh.

This is, to me, one of the great treasures of the Catholic Church – the fact that I can read something written nearly 1900 years ago, and recognize and indeed be familiar with the ceremonies and rites described. These are some of the earliest written records we have of how the first Christians lived and worshiped. And here we find the Mass, recognizable to us today. And that is really my point in relating this description of the early Mass to you. We should realize that the Mass we know today is the same Mass as that celebrated by the very first Christians.

Now, when I say that the Mass is the same, I don’t mean that it is literally the same down to the letter. Obviously there have been some changes over the centuries. No one thinks that those early Christians all sang “Gather Us In” from their Glory & Praise hymnals to kick off their liturgical celebration! But those elements of the Mass that have changed have all been surface changes. The true essence of the liturgy has remained the same from the beginning, which is why we can so easily identify with St. Justin’s description from so long ago.

The Mass ought to be viewed as God’s gift to the Church, the means by which He has chosen to communicate Himself to us most intimately through the Eucharist, by allowing us to consume His very Body and Blood into our own bodies. That precious gift should be treasured and revered. One then can view the Church as the caretaker of that gift. It is her great honor and responsibility to maintain the liturgy and to care for it, and to present it in such a way as to best transmit those divine mysteries to the faithful. And the specifics of this may indeed change from time to time, place to place, culture to culture.

Our modern age has seen great changes in the liturgy after Vatican II. Those too young to have lived through it can only imagine the difficulty involved in making those changes. The changes that we are preparing for this coming Advent are nowhere near as dramatic. Indeed, what we saw after Vatican II was the introduction of the Novus Ordo, or New Order of the Mass. What we are preparing for today is not a “new Mass” at all, but simply an updated edition, featuring a new translation, of the same Rite of Mass that we are currently using.

How Covid-19 is effecting Mass on Campus