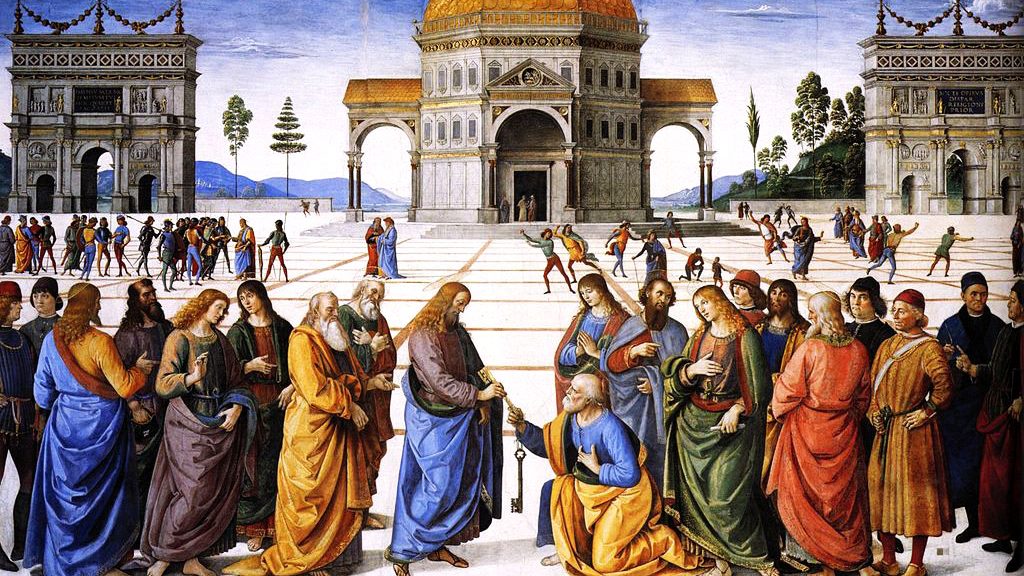 What’s the deal with Papal Infallibility?

A sample conversation between a curious Protestant and his Catholic friend:

Protestant: Hey, I just read that the Pope has only been infallible since 1870. What is that all about?

Catholic: Oh yeah, that’s true. See, before, the authority of the Catholic Church was in the Magisterium, which is all of the bishops teaching together. But in 1870, the Pope got tired of arguing with the bishops, so he proclaimed himself infallible so he wouldn’t have to argue with them anymore and they would have to do what he said.

Protestant: Oh, so now you have to do whatever the Pope says?

Catholic: No, not really. The real authority is with the Magisterium, like I said. We don’t need to do everything the Pope tells us—I mean what if he told us to all wear burlap? We wouldn’t have to do that. So it’s up to us really what we decide to do.

Protestant: Oh, ok. Thanks for explaining that.

Now many of you reading the above conversation will no doubt think something doesn’t sound quite right. And you would be correct! Our well meaning Catholic friend above very inaccurately described Papal Infallibility, but there is enough truth in his statements to be confusing to a lot of people, and potentially damaging if we are trying to explain our faith to others. So what do Catholics really believe about Papal Infallibility and where does that doctrine come from?

Let’s start by seeing just how much we know about infallibility itself. Karl Keating, in his book Catholicism and Fundamentalism, uses this example. Let’s say that the pope is infallible, not only in matters of faith and morals, but also in trigonometry. If he were presented a sheet of paper with 100 math problems on it, what is the least number he would get correct? If you said 100, you may have a good grasp of math, but not infallibility. The correct answer is zero. He could leave the page entirely blank. You see, infallibility is a negative protection. It prevents the pope from getting the wrong answer, but does not enable him to know the correct answer. He would have to learn trigonometry on his own. If he did not do his homework, he would have to leave each answer blank.

But, as we know, the pope is only infallible when teaching on matters of faith and morals as leader of the Christian world. He has to learn these things on his own, just as we would, through study of scripture, Church documents, the writings of the Church Fathers, theologians, and much time spent in prayer. He must come to his own conclusions—they are not given to him by revelation. But when he comes to these conclusions in matters of faith and morals, he is protected by the Holy Spirit from teaching in error.

Infallibility does not mean that the Pope is free of sin. This is called impeccability, and Catholics do not believe that the Pope is impeccable. But many will try to prove that the Pope is not infallible by citing examples of Popes who have fallen into sin. With 2000 years of Popes to choose from, the amount of bad apples they can cite is amazingly small, but it still misses the point. Infallibility is absence of error, not of sin. Popes are human beings, and can certainly sin.

So why do we believe in infallibility at all? Well, a lot of it goes back to the Scriptures themselves. Since many people who will be questioning Papal authority are from Protestant churches that believe in sola scriptura (that the Bible alone is the only guide for our faith), it will be helpful to know where in the Scriptures this notion can be found. Citing other sources will do no good if the person you are talking with only recognizes the authority of the Bible.

There are several Petrine verses, so called because they deal with Peter’s authority in the Church. The most well known is from Matthew 16:17-19. This is after Peter makes his profession of faith that Jesus is the Messiah. “Jesus said to him in reply, ‘Blessed are you, Simon son of Jonah. For flesh and blood has not revealed this to you, but my heavenly Father. And so I say to you, you are Peter [Kepa, which means “rock”], and upon this rock I will build my church, and the gates of hell shall not prevail against it. I will give you [singular] the keys of the kingdom of heaven; and whatever you [plural] bind on earth shall be bound in heaven; and whatever you loose on earth shall be loosed in heaven.’”

This verse sets Peter apart from the other disciples by changing his name from Simon to Peter, meaning Rock. He then promises to make him the foundation of his Church. He also gives him alone the keys to the kingdom of heaven, which signifies his authority. Many non-Catholic Christians will argue that the second “rock” in this verse refer not to Peter but to his profession of faith. Simple grammar argues otherwise. The phrase “this rock” would have to refer to the immediately preceding noun, which is Peter. His profession of faith was two verses earlier. Again, let’s use an example supplied by Keating. In the sentence, “I have a car and a truck, and it is blue,” which one is blue? Obviously it is the truck. It would be even more clear if the reference to the car was two sentences earlier.

Others say that in the original Greek the phrase reads, “you are Petros (meaning little rock), and upon this petra (meaning big rock) I will build my church.” Therefore the second rock could not be Peter. The problem with this is that “Petros” was only used in Greek because it is a masculine form of the feminine “petra” and therefore suitable as a man’s name. But Jesus was not speaking Greek. In Aramaic, the language Jesus would have used, the word in both cases is “kepa,” which is neuter like our English word “rock.” So it would have read, “you are Kepa, and upon this kepa I will build my church.” No difference exists until it is translated into Greek.

Other Biblical examples can also be cited. Let’s examine a few of these. Look to John 21:15-17. Here, right at the end of the Gospel, Jesus charges Simon Peter to “feed my lambs” and “tend my sheep.” Look in Luke 22:32. This is right before Jesus foretells Peter’s denial, and Jesus tells him, “I have prayed that your own faith may not fail; and once you have turned back [after the denials] you must strengthen your brothers.”

Christ also told his apostles to go preach the gospel and promised the protection of the Holy Spirit (Jn 16:13). That promise ensures that the Church will never fall away from the teachings of Christ (1 Tim 3:15). We as Catholic believe in the Apostolic succession, that is, that these promises made by Jesus were for all of time, and were therefore passed on from the original Apostles, the first bishops, to their successors for all generations, down to our own. This applies also to Peter, the first Pope. To believe otherwise would mean that the Church today has no authority at all, nor did any church after the last Apostle died. We would have nowhere to turn to for truth.

This protection means that when all of the bishops of the Church gather together at an Ecumenical Council and teach on a matter of faith or morals in union with each other, they cannot be wrong. We call this teaching body of bishops the Magisterium. We believe that this Magisterium is infallible in its teachings.

However, we also believe that the Pope alone among the bishops has a special infallibility. Although not formally defined until 1870, this was a notion that was held even by early Christians. As the primacy of the Papal office became clearer to the growing Church, so did Papal infallibility. As early as 256, Cyprian of Carthage wrote, “Would heretics dare to come to the very seat of Peter whence apostolic faith is derived and whither no errors can come?” In 433 Pope Sixtus III said that to assent to the Bishop of Rome’s decision is to assent to Peter, who lives in his successors and whose faith cannot fail. Augustine of Hippo even said, “Rome has spoken; the case is closed.” So even though they did not have the defined term “papal infallibility” as we do now, they understood it in its practice.

This also means that all Popes, not just those since 1870, have been infallible—they just did not have as full an understanding of their own infallibility as those after 1870 did. So why was it only defined in 1870? Well, traditionally in the Church only defines a doctrine when that doctrine is called into question. The Church does not “make up” new doctrine. It cannot add to the deposit of faith that was left to us by the Apostles after Pentecost. But it can come to a clearer understanding of that faith, and 2000 years of study and prayer have led us to a much clearer notion of what Christ intended our Church to be than those very first Christians could have had.

Throughout the life of the Church, there have been various individuals or groups who would question a church teaching. This would lead to debate, and often even heretical teachings. Sometimes these conflicts caused issues to arise that no one even thought of before! It is during times such as these that the Church makes an official definition, to close the matter. During the sixteenth and seventeenth centuries, after the Reformation and during the Enlightenment, the Pope’s authority was called more and more into question. This is why, in 1870, at the first Vatican council, it was decided to formally define the Pope’s special infallibility.

The Catechism of the Catholic church teaches us:

’The Roman Pontiff, head of the college of bishops, enjoys this infallibility in virtue of his office, when, as supreme pastor and teacher of all the faithful—who confirms his brethren in the faith—he proclaims by a definitive act a doctrine pertaining to faith or morals. . . . The infallibility promised to the Church is also present in the body of bishops when, together with Peter’s successor, they exercise the supreme Magisterium,’ above all in an Ecumenical Council. When the Church through its supreme Magisterium proposes a doctrine ‘for belief as being divinely revealed,’ and as the teaching of Christ, the definitions ‘must be adhered to with the obedience of faith.’ This infallibility extends as far as the deposit of divine Revelation itself.

So you can see from this that the Pope’s every word is not infallible, nor any documents he may have written prior to becoming Pope or as a private theologian. In these he is just as fallible as any other learned man. But when, in his office as Vicar of Christ, he “proclaims by a definitive act a doctrine pertaining to faith or morals,” then we are called by our faith to obey. This faith stems from a faith in Jesus Christ, who made Peter the head of His Church on earth, who promised these charisms to him, who promised to stay with his Church forever and that “the gates of hell shall not prevail against it.” Our faith in Christ would lead us to obey the authority of His Church, which is one, holy, catholic and apostolic.