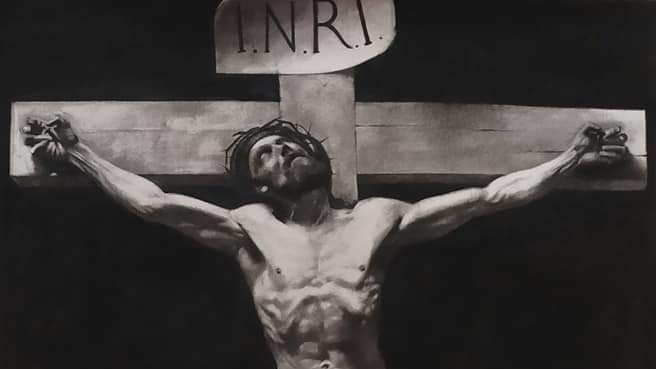 The King of Love

The Solemnity of Our Lord Jesus Christ, King of the Universe

What comes to your mind when you think of a king? Maybe it’s a man sitting high on a throne draped in regal robes with a golden crown on his head, issuing decrees. Or perhaps you think of a king as a brave leader, sword drawn, leading his army into battle. Whatever particular image it may conjure in your mind, the word “king” carries with it associations with power, authority, and strength.

The celebration of the Solemnity of Christ the King at the end of the Church’s liturgical year is like a jewel set in a crown. It is a reminder to us of the ultimate reality: Jesus Christ is Lord of all. He is the victor over sin and death. He is the just judge. He is the righteous lawgiver. He is the Ancient of Days sitting upon the throne. He is all of these things.

But he is more — because he is willing to be less. Our gospel for this Sunday shows our King beaten and broken. He wears a crown, not of gold, but of thorns. The proclamation, “This is the King of the Jews” is hung above him on the cross, not as a title of honor but in mockery. This is a very different sort of king from what we might imagine. Yet he is king.

Here is God’s anointed one. Here is the first born of all creation, through whom all things were made. Here is the beginning and the end. Here is our head and our king, hanging from a cross. And where are we? You and I are but criminals hanging beside him. One reviles Jesus, even as he dies along side him. But the other, equally guilty in his sin, calls out in faith, “Jesus, remember me when you come into your kingdom” (Lk 23:42). Which one are we?

As we come to the end of the year, the liturgical readings have been focused on the final judgment and Second Coming when Christ will reign in glory. On that day there will be a great division between sheep and goats, wheat and weeds, grain and chaff, light and darkness. These images are all about making a distinction. Some will be in the kingdom and others outside of it, and the difference will be determined by love.

C. S. Lewis once wrote that in the end we all get what we want. Another way to say this is that we will all get what we love. Those who love God and those made in God’s image will spend eternity with those whom they love. That’s heaven. Meanwhile, those who love themselves more than anything will spend eternity in a self-absorbed hell. We get to chose. Do we make fun of the man dying on the cross for us, or do we recognize our need, and His love, and say, “Jesus, remember me when you come into your kingdom?”

To be a part of Christ’s kingdom, we must be humble like him. You can’t recognize Christ as the Master of the Universe if you think of yourself as the master of your own universe. To have Christ as king means acknowledging that you are not the king. You are not the judge. You are not in charge. It’s a liberating feeling!

We learn what it means to love by following the example of our king, who shows his true power as he gives his life to others — to me and to you — on the cross. Here is a king who is not afraid to suffer for the good of his people. Here is a king who does not hesitate to lower himself in order to raise others up. This is Love. This is our King. This is our God.