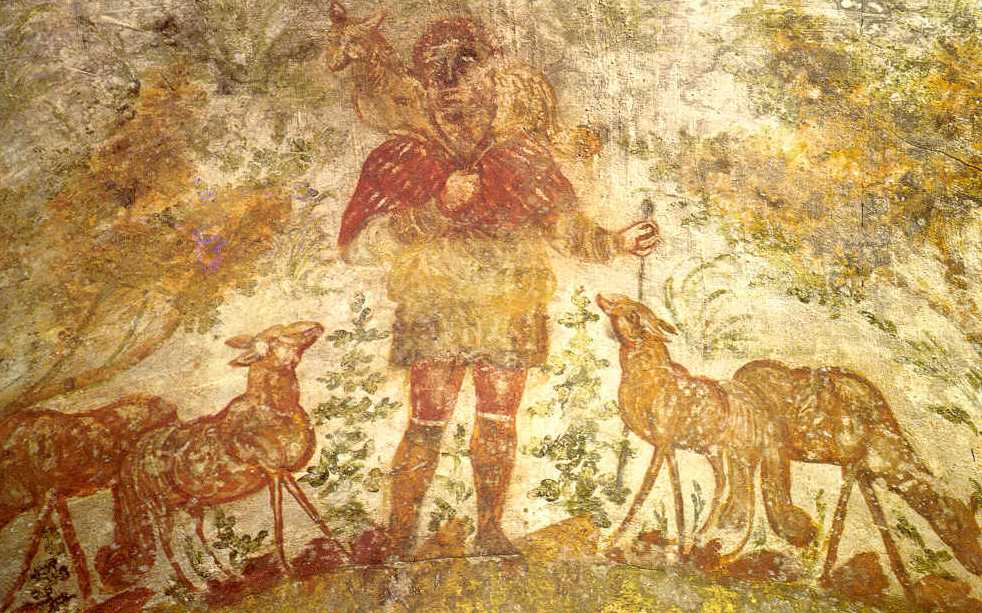 4th Sunday of Easter (B)

Today, we think of the cross as the universal symbol for Christianity. See a cross, and you immediately think “Christian.” But in the earliest days of the Church, Christians did not identify themselves by this symbol. Why not? Because the cross was everywhere around them, and it wasn’t pretty.

Jesus was not the only person to have been crucified. The Roman Empire used crucifixion as a standard means of execution until it was banned by the Emperor Constantine in the 4th century. Prior to that, crucifixion was an all-too-common sight in the public square. Christians did not need to wear crosses around their necks or display them on their walls to be reminded of Christ’s passion. Real life reminders were ready at hand. Instead, the most common Christian symbol in the early Church was the ichthys or fish, used in reference to the Apostolic mission to be “fishers of men” as related in Matthew 4:19.

For similar reasons, the earliest depictions of Jesus were not of His broken body on a crucifix, as has been typical in Catholic sacred art for many centuries. Instead, the earliest depictions of Jesus in Christian art show him as a shepherd. The image at the top of this post is from the Catacomb of Domitilla in Rome and dates from the mid-4th century. There are over 120 depictions of Jesus as the “Good Shepherd” in the Roman catacombs, most of which date to the second or third century. Jesus is portrayed as a young man in a tunic, often with a sheep over His shoulders.

Shepherding was a common enough occupation in the first century, but Jesus was a carpenter — a trade He learned from His foster-father, St. Joseph. Jesus did not herd sheep. His identification as the Good Shepherd comes from the passage in John’s gospel which we read from this Sunday.

I am the good shepherd,
and I know mine and mine know me,
just as the Father knows me and I know the Father;
and I will lay down my life for the sheep.
I have other sheep that do not belong to this fold.
These also I must lead, and they will hear my voice,
and there will be one flock, one shepherd (Jn 10:14-16).

If Jesus was a carpenter, why does He call Himself “the Good Shepherd?” It’s a very beautiful and fitting image of how our Lord relates to us. The work of a shepherd would have been familiar to everyone in the agrarian society of the first century. To the Jewish people, it would have called to mind Old Testament figures such as Moses and Abraham, both of whom tended sheep for a living, and especially David, who was both a shepherd and a king. When Jesus identifies Himself as the Good Shepherd, He is identifying Himself with these prophetic and kingly figures. But He is also telling us something of the nature of His rule over us. Jesus reigns not as a despotic tyrant, but as a loving shepherd tending his flock. 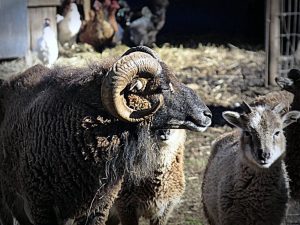 My family and I raise a small flock of sheep on our land. This time of year is an especially fun one for us, because we get to see the new spring lambs being born. It brings great joy to see these cute little critters bouncing around the pasture after their mothers, on nimble legs seemingly made out of springs. I don’t think I ever really knew what the word “frolic” meant until I saw a group of young lambs playing in the cool evening before sunset, under the watchful eyes of their mothers.

Raising sheep gives me a certain insight into some of Jesus’ words in this passage, because I know how sheep behave. For example, earlier this week someone who recently moved into a house down the street from us was walking her dog past our pasture and stopped to admire the sheep. She wanted to get a picture of them on her cell phone, but whenever she approached the fence they ran away. I told her they were skittish around anyone they didn’t know. On the other hand, if I approach the gate, they come running toward me because they know I’m the one who gives them food and water and cares for them. So when Jesus says, “I know mine and mine know me,” I know just what He’s talking about.

Those of us who know Jesus as our Good Shepherd will be drawn to Him because we trust Him. We know He is the one who provides for us and cares for us. So we can approach Him without fear or anxiety. We don’t need to run away from His commands or precepts.

But there are ways in which raising our little backyard flock of sheep differs dramatically from the form of shepherding Jesus’ listeners would have been familiar with. Our flock is small. We keep them on a small parcel of land, easily fenced in. They are contained and protected from predators. So my role as a shepherd to these sheep is fairly passive.

An ancient Jewish shepherd might have a flock of several hundred sheep to keep track of. And there were no fenced in pastures. The shepherd would lead his flock out into the country, sometimes over great distances, to where they could find good grass and plentiful water. While the sheep grazed, the shepherd would stand watch. Predators such as wolves were always a danger. A shepherd had to be ready to drive off any creature that sought to harm a member of his flock (that’s why David was so good using his sling). This way of shepherding is active. It takes work and dedication. It takes great care.

When Jesus says, “I am the Good Shepherd,” He is saying, “I will guide you. I will lead you. I will provide for your needs. I will guard you and protect you. I will drive away that which will harm you. I will care for you. I will keep watch over you. I will not leave you. Trust in me.”

Jesus says in this Sunday’s gospel that His flock consists not only of the Jewish people who first heard the message of the Good Shepherd, but of all those who hear His voice. This includes you and I today. So let us listen to the voice of our Shepherd. Let us trust Him to guide, guard and protect us. Let us follow Him to green pastures and living waters. As St. Peter, who answered Jesus’ call to help feed the sheep, reminds us, “there is no salvation through anyone else” (Acts 4:12).

Priesthood of the Good Shepherd