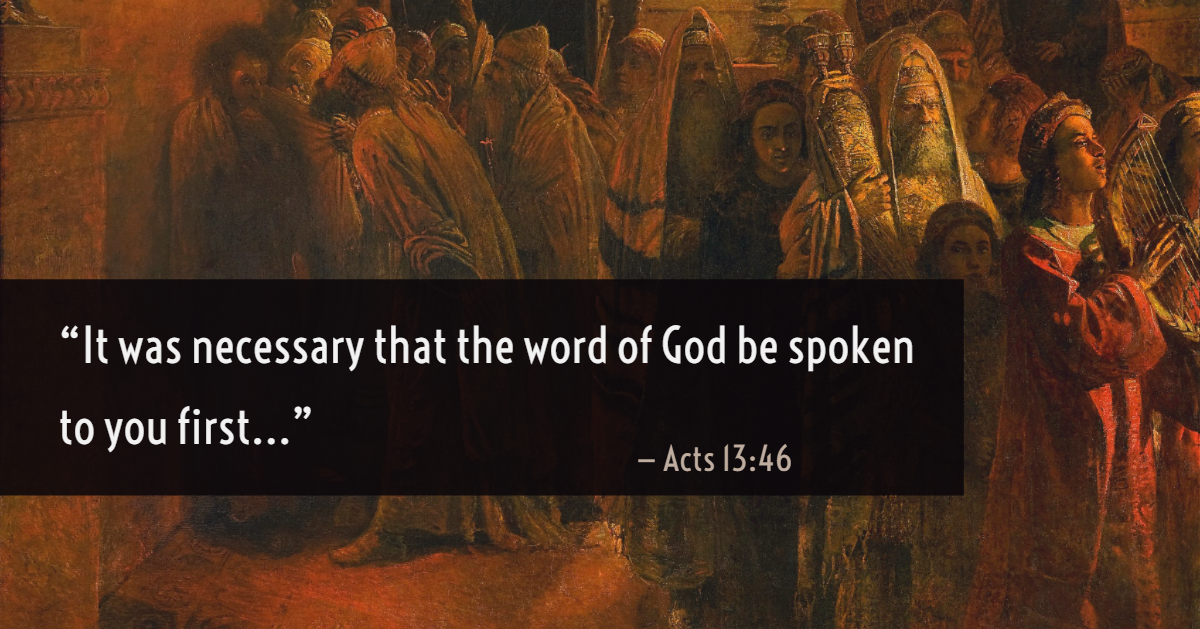 The First to Hear the Word of God

The 4th Sunday of Easter (C)

As college students across the nation prepared for their final exams and the start of summer, one 19-year old in San Diego walked into a Jewish synagogue with a rifle and opened fire, killing one woman and wounding three more.

What would drive a young person, who should be taking classes, going on dates, and discovering his place in the world, to carry out such an act of senseless violence? In his own words, it was because, “the Jewish people are destroying the white race” (AP), as he told the 911 dispatcher when we called to turn himself in. This is just the most recent example in a long history of Antisemitism. Sadly, Christianity is often used as an excuse for anti-Jewish sentiment. But this is a gross misuse and misrepresentation of the Christian faith, which commands us to love our neighbor.

As this Sunday’s Mass readings describe the tension between Jewish authorities and the Apostles, I wanted to take this opportunity to explore the teachings of the Catholic Church regarding the Jewish people.

The first reading from Acts describes Paul and Barnabas preaching at a synagogue in Antioch.

When the Jews saw the crowds, they were filled with jealousy and with violent abuse contradicted what Paul said. Both Paul and Barnabas spoke out boldly and said, “It was necessary that the word of God be spoken to you first, but since you reject it and condemn yourselves as unworthy of eternal life, we now turn to the Gentiles.”

The passage goes on to say that the Jews stirred up persecution against Paul and Barnabas and expelled them from the synagogue. The Apostles “shook the dust from their feet” as they left (Acts 13:51).

A cursory reading of this passage suggests that the Jews are our enemies. But to read this passage or others like it as justification for violence and hatred against Jewish people is entirely unjust. To understand why, it is important to place these events in their historic context.

What is the Church’s Relationship with the Jewish People?

Unlike Christianity, which is a universal faith with believers from every nation, Judaism is both a religion and an ethnicity. One can be a Gentile (non-Jew) who converts to Judaism, as some did even in Jesus’ time. But for the most part, Judaism is the faith practiced by those of Jewish ethnicity. It is not an proselytizing religion, meaning they don’t seek to evangelize and make converts. It is a nationalistic faith. They understand their people and nation to have a special covenant relationship with God.

This means it can be difficult at times to differentiate between the Jewish ethnicity and the Jewish faith, although sometimes that is an important distinction. In terms of hatred and violence against them, the distinction does not matter. It is wrong either way.

But the first thing to realize is this: the first Christians were Jewish! All of the Apostles, St. Paul, the earliest converts, the Blessed Virgin Mary, and of course Jesus himself were ethnically and religiously Jewish. They did not think of themselves as being anything else.

By proclaiming Jesus to be the Messiah (Christ) they were not seeking to break away from Judaism to begin a new and different religion. They saw Jesus as the Messiah that the Jewish scriptures and prophets foretold. The entire Jewish religion pointed to Christ and found fulfillment in Christ!

But not every Jewish person readily accepted Jesus as the Messiah. This should come as no surprise. Thus we read in the Acts of the Apostles of increasing conflict and tension between the Apostles and Jewish leadership as the Apostles continued to proclaim a Messiah that the religious authorities rejected. This Sunday’s reading is just one example of this. What the Apostles come to realize early on is that while Jesus did not break from Judaism, he expanded it by enlarging God’s covenant to include all peoples. The Jewish people were not excluded from this covenant. Quite the contrary; they were its first recipients. But like anyone else, they had to choose to embrace it. Not all did.

The same is true of the Gentiles. Some who heard the gospel preached accepted Jesus as their Lord and God. Others did not. The one thing that made the Jewish people different is that they had been the recipients of God’s revelation and so ought to have been more prepared to recognize the Messiah when he came. But this by no means justifies hatred or violence toward the Jewish people then, and certainly not toward their descendants 2000 years later.

The Jewish people today continue to have a special relationship with the Church. The Catechism explains:

When she delves into her own mystery, the Church, the people of God in the New Covenant, discovers her link with the Jewish People, the first to hear the Word of God. The Jewish faith, unlike other non-Christian religions, is already a response to God’s revelation in the Old Covenant. To the Jews “belong the sonship, the glory, the covenants, the giving of the law, the worship, and the promises; to them belong the patriarchs, and of their race, according to the flesh, is the Christ” (Rom 9:4-5), “for the gifts and the call of God are irrevocable” (Rom 11:29).

The Jewish people are often described as our elder brethren in the faith. But I think a more apt metaphor would be to say that they are the roots of our tree. If a tree is cut away from its roots, it withers and dies. This is why the Fathers of the Church were so adamant about keeping the Hebrew Scriptures in the Christian Bible, even when heretical groups wanted to reject them (as did many of the early Gnostic sects). They knew that Christianity was intrinsically connected to Judaism and could only be rightly understood in that historic Jewish context. Or as St. Augustine put it: the new is hidden in the old and the old is revealed in the new.

Far from justifying hatred for the Jewish people, this should cause us to respond in love to them as we await a future in which we will all be united around God’s throne.

I, John, had a vision of a great multitude, which no one could count, from every nation, race, people, and tongue. They stood before the throne and before the Lamb…

In his letter to the Romans, St. Paul states that, even though they are “enemies in respect to the gospel” the Jewish people are still “beloved… because the gifts and the call of God are irrevocable” (Rom 11:28-29), and he looks forward to the day when “all Israel will be saved” (Rom 11:26).

The good news of Jesus Christ is this: God’s covenant does not belong only to one people, but to all peoples who are made one people in Christ.

To reunite all his children, scattered and led astray by sin, the Father willed to call the whole of humanity together into his Son’s Church. The Church is the place where humanity must rediscover its unity and salvation. The Church is the world reconciled.

Those who belong to Christ and worship at his throne will include men and women of every race, nationality and ethnicity, speaking in every tongue, including both Gentiles and Jews. This is why racism in any form is not only a grave sin, but is totally incompatible with authentic Christianity.