The Eucharistic Faith of the Early Christians 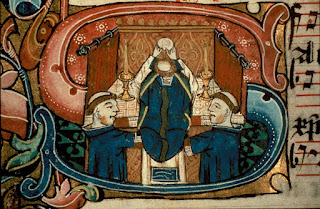 Every year on the Sunday following the Solemnity of the Most Holy Trinity, the Church celebrates another solemnity, that of the Most Holy Body and Blood of Christ, popularly called Corpus Christi (Latin for “Body of Christ”).  Even though every Mass by its very nature is supremely Eucharistic, on this feast we pay special attention to the great gift of the Eucharist; that continuation in time of the Incarnation of Christ, God’s gift of His very self to us so that we may become partakers of that Divine Triune nature that we celebrated last week.

The Second Vatican Council famously called the Eucharist “the source and summit of the Christian life” (LG 11).  In a very real way, the Church flows from the Eucharist and it’s purpose is to make the Eucharist present.  The centrality of the Eucharist to the life of the Church is not some modern development of doctrine; nor is it some optional Catholic devotion that the faithful may take or leave.  It has been at the core of our faith from the very beginning of the Church.  In the weeks during the Easter season, you may recall the many gospel readings that relate how the disciples recognized the risen Lord “in the breaking of the bread.”  From the earliest days of the Church, Christ has made Himself present in the Eucharistic meal.

We have only to look to the early Church Fathers to find testimony to this Eucharistic faith.  There is not a one who does not make mention of the Eucharist, so central it is to the life and mission of the Church.  Here are a few major examples.

ST. IGNATIUS OF ANTIOCH
St. Ignatius was bishop of Antioch after St. Peter left to establish the Church in Rome with St. Paul. It is said that Ignatius was taught the faith by St. John the evangelist.  He was martyred in 110 AD in Rome.  Before his martyrdom, he wrote letters to many Churches.  Those letters are some of the earliest post-New Testament Christian writings.

[Heretics] abstain from the Eucharist and from prayer, because they do not admit that the Eucharist is the flesh of our Saviour Jesus Christ, the flesh which suffered for our sins and which the Father, in His graciousness, raised from the dead (Letter to the Smyrnaeans, 6).

ST. JUSTIN MARTYR
St. Justin lived in the second century and was one of the first major apologists for the Christian faith against the pagan Roman empire.  His writings are some of the earliest we have that describe the ritual of the Mass.

There is then brought to the president of the brethren bread and a cup of wine mixed with water; and he taking them gives praise and glory to the Father of the universe, through the name of the Son and of the Holy Spirit, and offers thanks at considerable length for our being counted worthy to receive these things at his hands… And this food is called among us the Eucharist, of which no one is allowed to partake but the one who believes that the things which we teach are true, and who has been washed with the washing that is for the remission of sins, and unto regeneration, and who is so living as Christ has enjoined.  For not as common bread and common drink do we receive these; but in the like manner as Jesus Christ our Saviour, having been made flesh by the Word of God, had both flesh and blood for our salvation, so likewise have we been taught that the food which is blessed by the prayer of His word, and from which our blood and flesh by transmutation are nourished, is the flesh and blood of that Jesus who was made flesh (First Apology, 65).

ST. JOHN CHRYSOSTOM
St. John Chrysostom lived during the fourth century and was the Archbishop of Constantinople.  He was known for his eloquent preaching (his name means “golden tongued”) and his staunch defense of the faith.

He [St. Paul] called it a cup of blessing [1 Cor 10:16], because holding it in our hands, we so exalt Him in our hymn, wondering, astonished at His unspeakable gift, blessing Him, among other things, for the pouring it out, but also for the imparting thereof to us all.  ‘Wherefore if you desire blood,’ says He, ‘redden not the altar of idols with the slaughter of brute beasts, but My altar with My blood.’ Tell me, what can be more tremendous than this? What more tenderly kind? (Homilies on 1 Corinthians, 24:1)

This [the Eucharist] is even that Body, the bloodstained, the pierced, and that out of which gushed the saving fountains, the one of blood, the other of water, for all the world… This Body has He given to us both to hold and to eat; a thing appropriate to intense love (Homilies on 1 Corinthians, 24:4).

ST. AUGUSTINE
St. Augustine is one of the best known of the Church Fathers, living from 354 to 430 AD.  He was bishop of Hippo, a prolific writer, and stalwart defender of the faith against many heresies, including Pelagianism and Arianism.

If you are like me, you will take comfort in knowing that our faith today is a participation in the same faith professed by these great saints.  Their words from the past still give expression to our continuing belief, the living faith of the Church in the saving power of Christ’s life given freely for us, made present today in humble form of bread and wine.  The only response we can rightly offer to such a gift is one of humble thanksgiving, which is what the Church has always expressed in her word Eucharist – “to give thanks.”

The Ordinary Work of Christians