Should Christians Weep at Death? 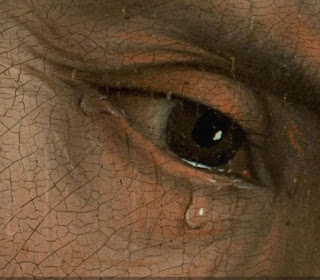 The occasion for our Lord’s sadness was the death of His friend Lazarus.  Even though Jesus would soon call Lazarus forth from the tomb, his death was still reason enough to cause our Lord to grieve.  The message is profound.  God Himself is saddened by death.

Christians who have suffered the death of a loved one know the schizophrenia that can accompany such loss.  On the one hand you are deeply saddened by their passing.  On the other, your faith tells you that they are now in the hands of God, hopefully rejoicing with the saints in heaven (or perhaps enduring that final purification in Purgatory that will lead them to that reward).  People may tell you to be happy that your loved one is now with the Lord.  You may even feel guilt over your sadness.

This is the result of well-meaning, but ill-thought-out theology around death.  Christians needn’t feel that they are lacking faith in Christ if they mourn the loss of a loved one.  Even Jesus wept.

Lazarus was not the only person Jesus raised from the dead.  In our gospel reading for this Sunday (Lk 7:11-17) Jesus raises the dead son of an unnamed widow from Nain.  In this instance, Jesus comforts the grieving mother by telling her, “Do not weep.”  Then our Lord shows His power over life and death by bringing her son back to life even as he was being carried on his funeral bier.

Death is unnatural.  It is not part of God’s plan for us, and so Jesus rightfully is grieved by it.  So it’s OK if death grieves you, as well.  It should.

God is God of the living (Lk 20:38), the Lord of life.  When He made man, He breathed life into him, just as he breathed life into the child raised by Elijah’s prayer in our first reading (1 Kgs 17:17-24).  Life is God’s gift to us.  It is a gift our first parents rejected by original sin.  And so death has been with us from the beginning, but it is not part of our original nature.  God made mankind a composite creature — we are body and soul, flesh and spirit, material and immaterial.  These two parts of us are meant to be together. Death occurs when the soul and the body are separated.  God’s creation is torn asunder.

This is why even before Christ, most Jews (except for the Sadducees) believed that there would be a physical resurrection at the end of time.  The souls of the dead would be reunited with their physical bodies.  This is why one of the signs of the coming of the Messiah was the rising of the dead.  Just after this episode in Luke’s gospel, Jesus tells the disciples of John the Baptist, “Go and tell John what you have seen… the dead are raised up.”  John would know that meant one thing: the Messiah has come.

But if Jesus, the Messiah, has come to conquer death, why do people still die?  Lazarus died again.  The widow’s son died again.  All those disciples who saw these miracles and believed in Jesus died.  How, then, can we say that Jesus conquered death?

Our God is a God of surprises.  The Son of God did not conquer death by making it so that no one ever dies again.  That might be how you or I would do it.  But God overcame death in a surprising way– by embracing it.  Jesus came not to take the pain of death away from us, but to suffer it Himself and come out the other side.  He transformed what was the result of our sin into the means of our salvation.  Christians, then, no longer run away from death in fear and trembling.  We approach it with hope and courage, arm in arm with Christ our Lord, who will lead us through death into life.

The Catechism of the Catholic Church teaches that Jesus “has transformed the curse of death into a blessing” (CCC 1009).

Because of Christ, Christian death has a positive meaning… What is essentially new about Christian death is this: through Baptism, the Christian has already “died with Christ” sacramentally, in order to live a new life; and if we die in Christ’s grace, physical death completes this “dying with Christ” and so completes our incorporation into Him in His redeeming act… In death, God calls man to Himself.  Therefore the Christian… can transform his own death into an act of obedience and love toward the Father, after the example of Christ (CCC 1010-11).

Death is unnatural.  It is a consequence of sin.  It is not what God wants for His children.  Therefore it is right that we should be grieved by it.  “Jesus wept.”

Yet death is not the victor.  God’s Son died for us and rose from the dead so that we may not only live, but live forever in His blessed friendship.   Therefore the Christian can approach death with the sure hope of faith in Christ.  “Do not weep.”

What should we do when death enters our lives?  We should follow the example of Jesus by comforting those who mourn.  We should share their sorrow and weep with them.  We should pray for those who have died, that they may enter peacefully into God’s mercy.  And we should pray, also, that we may hold fast to the faith, remain in God’s friendship, and always be prepared for that day when we will be called to cross over that threshold and enter into eternity with Christ our Lord.

A Catechesis on Death