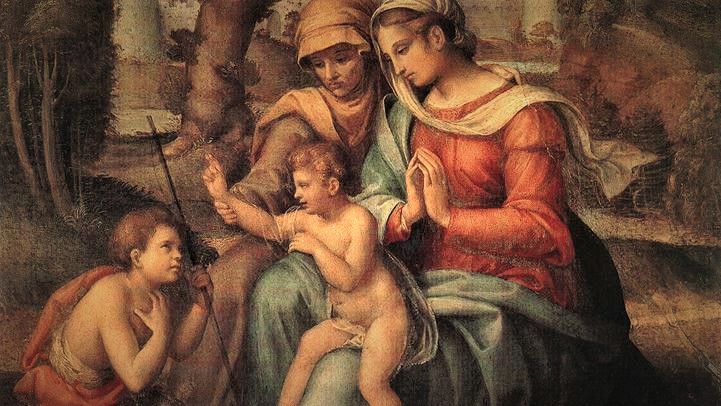 The Nativity of John the Baptist

It is common for the Catholic Church to celebrate the feast day of a saint on or near their date of death, as it marks the end of their earthly pilgrimage and their triumphal entry into heaven. There are only three people whose birthdays are also celebrated by the Church with a special feast — our Lord (Dec 25), our Lady (Sept 8), and St. John the Baptist (June 24). The Nativity of St. John the Baptist is also one of the few solemnities that are observed even if it falls on a Sunday, as it does this year — ordinarily Sundays of the year supersede other commemorations. Both of these facts speak to the unique role St. John the Baptist plays in salvation history. 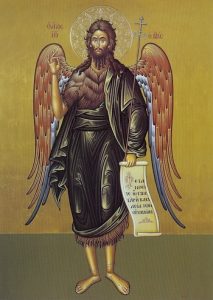 St. John is revered as being the final prophet who points the way to Christ; the herald who announces the rising of the dawn; the voice crying out in the wilderness, “prepare the way of the Lord.”  He is often portrayed in iconography with angel’s wings, indicating his status as God’s messenger (the word angel meaning “messenger”). He is also typically portrayed in his customary camel hair clothing, with unkempt hair and wild beard. We picture him living a hermetical life out in the desert, eating locusts and honey.  With all the focus on St. John being a somewhat eccentric prophet, we often forget another major detail of his life. St. John was a priest.

As Pope Benedict XVI points out in his book Jesus of Nazareth: The Infancy Narratives, St. John the Baptist was the bridge connecting the priesthood of the Old Covenant to the New Covenant priesthood of Jesus Christ. The Nativity of John the Baptist is the perfect time to reflect on his priestly role, because it was a priesthood he inherited from his parents.

John was the son of St. Elizabeth, cousin of the Blessed Virgin Mary, and St. Zechariah. As Pope Benedict XVI teaches, his lineage is important.

The story of John has particularly deep Old Testament roots. Zechariah is a priest from the division of Abijah. His wife Elizabeth is also of priestly stock: she is of the tribe of Aaron (cf. Lk 1:5). According to Old Testament law, the service of priests is tied to membership of the tribe of the sons of Aaron and Levi. So John the Baptist is a priest. In him the priesthood of the Old Covenant moves toward Jesus; it becomes a pointer toward Jesus, a proclamation of his mission.

Benedict warns that there can be a temptation to draw a sharp line of division between the old priesthood and the new, between the Jewish law and prophesy and the Christ who fulfilled them. The Holy Father is clear that there is continuity between the two, with the old flowing into the new. Speaking of Zechariah and Elizabeth, he reminds us that both are said to be “righteous before God” and “that they walked blamelessly in all the commandments and precepts of the Lord.”

The “just” are those who inwardly live the ordinances of the law aright — those who walk their path in righteousness, according to the revealed will of God and open up space for new action by the Lord. In [Zechariah and Elizabeth], Old and New Covenant converge and combine to form a single history of God with men.

In other words, the Old and New Testaments are not two different stories. They are two parts of the same story with one flowing into the other. The new fulfills the old and the old points to the new, just as John the Baptist points to Jesus.

It strikes me as important that in John the whole Old Covenant priesthood becomes a prophecy of Jesus, and so… it points toward him, it makes itself his. A one-sided emphasis on the contrast between the Old Testament sacrificial cult and the spiritual worship of the New Covenant (cf. Rom 12:1) would obscure this connecting line, this inner dynamic of the Old Testament priesthood, which is a path toward Jesus Christ…

When we think of the Old Testament priesthood, we think of priests sacrificing animals like rams and bulls, most significantly during special annual celebrations such as Passover. This solemn duty fell to those descended from Aaron and Levi, as Pope Benedict XVI above reminds us. The Levitical priesthood was established in Exodus as part of God’s covenant with Moses. But in more general terms, the priesthood has been around long before that. In fact, it has been around from the very beginning.

A priest is one who is authorized to offer sacrifice on behalf of the community. We see this clearly in the Old Testament, with priests sacrificing animals such as lambs. The first account of a sacrifice being offered to God is found in Genesis chapter 4, when Cain offers God the produce he grew, while Abel, a shepherd, offers God “the fatty portion of the firstlings of his flock” (Gen 4:4). Abel’s offering was more pleasing to God because it constituted a greater sacrifice.

But why do priests need to offer sacrifices to God at all? Obviously this is important, as a whole class of people is set aside to make this their primary task. Why the need for all this sacrifice? It is to make reparation. It is to set things right between God and man. Some biblical scholars look even further back than Cain and Abel to find the first sacrifice. They look to Adam and Eve, our first parents, who are clothed by God with garments made from animal skin when they are banished from Eden (Gen 3:21). In other words, an animal had to die in order to “clothe” or cover the sinfulness of Adam and Eve. And God himself made this sacrifice for them.

So if God makes the first sacrifice to repair the damage of human sin, it is fitting that God would also make the final sacrifice, offering his only begotten Son, as the ultimate remediation for our sin. Because all of the sheep and goats in the world could not bridge the gap between God and man caused by sin. Only God can bridge that infinite gap, and he does so in Jesus Christ.

This does not make the Old Testament priesthood wrong. It does not make it pointless or futile. It makes it a sign; or, as Pope Benedict XVI calls it, a “prophesy” pointing to Jesus. Christ fulfills the Old Testament priesthood by becoming our eternal High Priest and establishing for us a new covenant with a new priesthood, whose job is no longer to offer animal sacrifice but to re-present for us the one eternal sacrifice of Jesus Christ in the Eucharist.

The fact that John the Baptist was a priest is important because he is the ultimate old covenant priest, who points to Jesus and says, “One is coming after me” (Jn 1:27), and, “He must increase and I must decrease” (Jn 3:30). He shows us what the priesthood was leading to. All priesthood before Christ flows toward him. All priesthood since Christ flows from him. Christ stands at the center. And John the Baptist stands next to him, saying, “Behold the Lamb of God; behold him who takes away the sins of the world” (Jn 1:29).

The King of Love