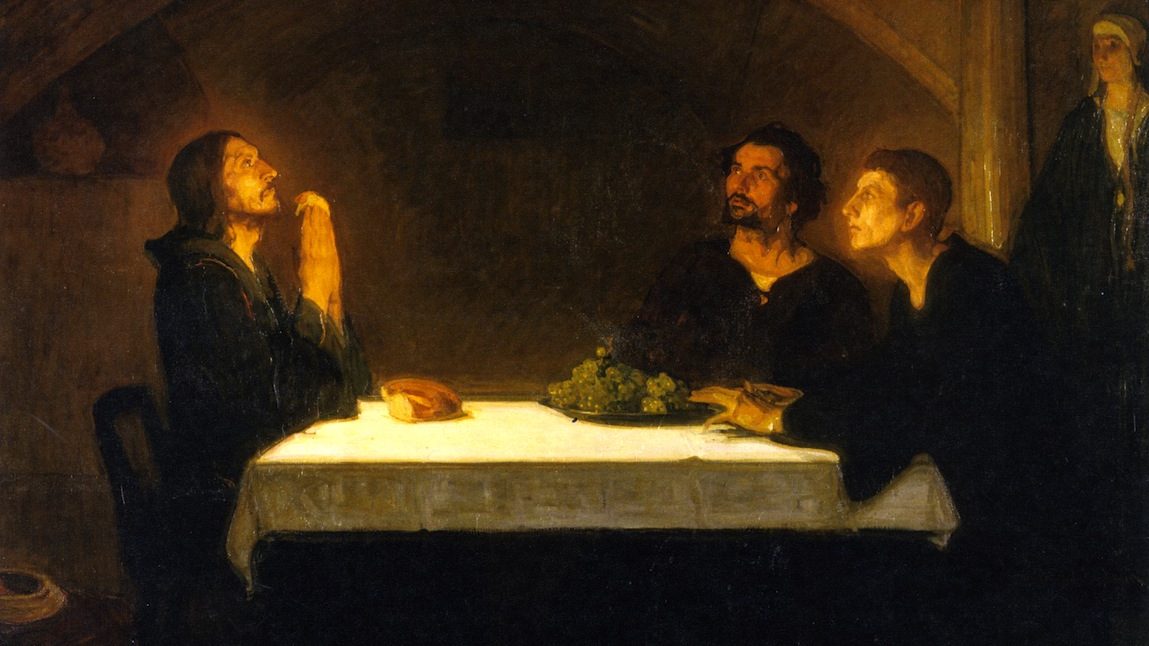 The first Eucharistic liturgy after the Last Supper was celebrated by Jesus Christ himself, on the very day he rose from the dead. It’s true. That’s what we read about in Luke 24:13-35, when the two disciples walking the road from Jerusalem to Emmaus encounter the Risen Christ. Along the way he teaches them “what referred to him in all the scriptures” (v. 27), and then they finally recognize his presence “in the breaking of the bread” (v. 35).

The formula used to describe the manner in which Christ broke bread with them suggests that this was not a simple meal, but rather a ritual meal of the same kind that Christ celebrated with the Apostles at the Last Supper.

From the Emmaus encounter:

[W]hile he was with them at table, he took bread, said the blessing, broke it, and gave it to them. With that their eyes were opened and they recognized him…

And from the Last Supper:

Then he took the bread, said the blessing, broke it, and gave it to them, saying, “This is my body, which will be given for you; do this in memory of me.”

While the first Mass after the Resurrection was celebrated on Easter Sunday by Christ himself, we don’t have a lot of details about the liturgy other than what we read in this gospel account. However, it is clear that “the breaking of the bread” was used by Luke in the Acts of the Apostles to describe the Eucharistic liturgy celebrated by the first Christians.

They devoted themselves to the teaching of the apostles and to the communal life, to the breaking of the bread and to the prayers.

Every day they devoted themselves to meeting together in the temple area and to breaking bread in their homes.

Our first detailed account of what the Eucharistict liturgy of the early Church looked like comes from the writings of St. Justin Martyr, who wrote in the middle of the 2nd century during a time when Christianity was illegal and no one who was not a fully initiated (baptized) member of the community was permitted to participate in the sacred rites of the Church. He describes in this account, written around the year 155 AD, just what Christians do on Sunday.

This excerpt from his First Apology is included in the Office of Readings from the Liturgy of the Hours for the 3rd Sunday of Easter (the same Sunday when the Emmaus gospel is read at Mass).

No one may share the Eucharist with us unless he believes that what we teach is true, unless he is washed in the regenerating waters of baptism for the remission of his sins, and unless he lives in accordance with the principles given us by Christ.

The apostles, in their recollections, which are called gospels, handed down to us what Jesus commanded them to do. They tell us that he took bread, gave thanks and said: Do this in memory of me. This is my body. In the same way he took the cup, he gave thanks and said: This is my blood. The Lord gave this command to them alone. Ever since then we have constantly reminded one another of these things. The rich among us help the poor and we are always united. For all that we receive we praise the Creator of the universe through his Son Jesus Christ and through the Holy Spirit.

On Sunday we have a common assembly of all our members, whether they live in the city or the outlying districts. The recollections of the apostles or the writings of the prophets are read, as long as there is time. When the reader has finished, the president of the assembly speaks to us; he urges everyone to imitate the examples of virtue we have heard in the readings. Then we all stand up together and pray.

On the conclusion of our prayer, bread and wine and water are brought forward. The president offers prayers and gives thanks to the best of his ability, and the people give assent by saying, “Amen.” The eucharist is distributed, everyone present communicates, and the deacons take it to those who are absent.

The wealthy, if they wish, may make a contribution, and they themselves decide the amount. The collection is placed in the custody of the president, who uses it to help the orphans and widows and all who for any reason are in distress, whether because they are sick, in prison, or away from home. In a word, he takes care of all who are in need.

We hold our common assembly on Sunday because it is the first day of the week, the day on which God put darkness and chaos to flight and created the world, and because on that same day our saviour Jesus Christ rose from the dead. For he was crucified on Friday and on Sunday he appeared to his apostles and disciples and taught them the things that we have passed on for your consideration.

Sound familiar? The writings of the apostles and prophets are read (the Liturgy of the Word); the presider speaks to us, urging us to follow their example of virtue (the Homily); then everyone prays (the Universal Prayer, or General Intercessions), bread and wine are brought forth (Offertory Rite), the prayers of thanksgiving are said over them (Eucharistic Prayer), after which it becomes “the flesh and blood of the incarnate Jesus.” Then we all say, “Amen” and the Eucharist is distributed. It’s the Mass, just like we know it! They even took up a collection!

It’s an interesting fact that the village of Emmaus has been lost to history. There are several possible contenders that have been put forward by archaeologists, and maybe one day we’ll know its location for certain. But for now it’s a mystery. And that’s fine, really, because for us, Emmaus is wherever the Mass is celebrated, no matter where in the world we may be. It’s where we can still today recognize Jesus among us in the breaking of the bread.

What Are You Giving Yourself To?

On Giving to God What is Due