Coffee, the Rosary & the Bible 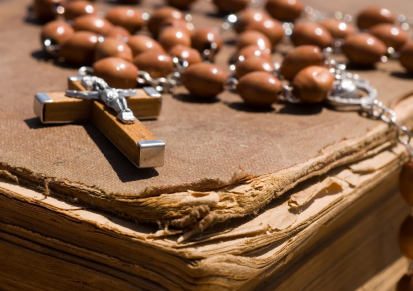 An imagined conversation between two friends enjoying coffee in the park…

CHARLES:  Sorry I’m late.  The line at Starbucks was moving really slow.  But I did remember this time that you don’t take sugar, so I’m learning!  Here’s your coffee.

FRANK: Thanks!  And I don’t mind the wait at all.  It’s a beautiful day, and I was able to get in some extra prayer time while I waited.  I got through three decades of the rosary.

CHARLES: [smiling] The rosary?  So were you praying or just doing “vain repetitions?”

FRANK:  Gimmie-a-break.  We’ve been over this, there is nothing “vain” about how I pray.

CHARLES:  I know, I’m just giving you a hard time.  I still don’t know why you need those beads to pray, though.

FRANK:  Well, I don’t need them, but they do help.  They keep me from losing count!

CHARLES: There you go, that’s what I mean!  Why do you need to count your prayers?  I’m just saying all that repetition isn’t Biblical.  The Bible tells us not to pray with vain repetitions.  Matthew 6:7.

CHARLES: Well, I don’t know what Bible you are reading, but my King James Version says “when you pray use not vain repetitions as the heathens do.”  If you want to pray like a heathen, go ahead.  But that’s not what Jesus says to do.

FRANK: I think what Jesus was saying was to pray sincerely and don’t just say the words.  Right before that, He says, “Do not pray like the hypocrites.”  I think He’s just reminding us to pray intentionally and with meaning.  We shouldn’t just be going through the motions.

CHARLES:  I can agree with that.

FRANK: But this does bring up an interesting point.

FRANK: You read your translation of the Bible and think I’m guilty of praying with “vain repetitions” because I pray the rosary.  I read the exact same verse in my Bible that says “do not babble,” and I think of the people in your church who like to stand up and speak in tongues.  Sounds like babbling to me.

CHARLES: That’s not what we believe they are doing.

FRANK: I understand that.  That’s not my point.  My point is that we can both be reading the same passage of the Bible and come to two very different conclusions.

CHARLES: And this surprises you?

FRANK: [laughing] No, it doesn’t!  We’ve had too many conversations for that!  I’m just saying, you say your church’s teachings are based on the Bible, right?

CHARLES: Yes, the Bible alone is our sole rule of faith.  That’s one of our fundamental principles.

CHARLES: Well, most people in my church use the King James Bible, and that’s what my family has always used.  But I don’t think it’s a requirement.  I mean, I have other Bible translations I like to read.  The King James can be a bit formal for general reading, so I like to read others, too.

FRANK: So how do you know any of those are accurate?  I mean, if your whole faith is based on the Bible, it seems like it would be pretty important to have an accurate version of the Bible.

CHARLES: It is, I agree.  I guess I never really thought about it, but you are right, there are some translations that I just won’t use.  I don’t like paraphrases.  I feel that more literal translations are more authentic.

FRANK: And you are trusting in the translators to be faithful to the original languages.

CHARLES: Yes, I have to, I guess.  I mean, I don’t speak ancient Hebrew or Greek or Aramaic.  I don’t know anyone who does.  But the people who translate the Bible have studied these ancient languages and so we rely on their expertise.

FRANK: Do you think the Bible translators are infallible?

CHARLES: Of course not!

FRANK:  Good!  If you had said “yes” I would have called you out because you pick on me for thinking the Pope is infallible!  But that raises another question.  If you believe that the Bible is the infallible word of God, what does it mean if you don’t have infallible translators?  Wouldn’t that mean that your English edition of the Bible (whichever one you use) might contain errors?

CHARLES: We believe that the Biblical text, in its original languages, is the inspired word of God.  But any given translation or edition of the Bible could in theory contain errors, yes.

FRANK:  That’s what we believe, too.  The difference is that you accept only the Bible as your rule of faith.  I don’t.  As a Catholic, I believe in both Sacred Scripture and Sacred Tradition.  That makes a big difference.

CHARLES: What do you mean?  Does that mean you think Catholic translations of the Bible are infallible?

FRANK: No, what it means is that we interpret the scriptures in line with our tradition.  We don’t have to interpret the scriptures by themselves.  So if there is a question about a particular translation or something, it gives us a broader context in which to work that out.  I’m just thinking what it would be like if I were in your shoes and only had the Bible to go on.

CHARLES: What do you mean?  Isn’t it simpler and easier to just go by what the Bible says?

FRANK: But unless the translation you are reading was made by infallible translators, how do you know your Bible is really inerrant?  I’m just saying if the only thing you have to go by is the Bible, it’s pretty important to have a correct Bible.

CHARLES: I see what you are saying…

FRANK: And for that matter, how do you even know you have the right books in the Bible?

CHARLES: Why wouldn’t we?

FRANK: Well, you know Catholic Bibles and Protestant Bibles are different.  We have books you don’t have in yours.

CHARLES: You mean the Apocrypha?

FRANK: We don’t call them that, but yeah.  There were seven books in the Old Testament that Martin Luther took out.  So what I’m wondering is, how do you know he was right?  I mean, if my whole faith was based on the Bible, I’d want to make sure I had the whole Bible to go by.

CHARLES: But Luther removed them because they were not authentic.  The Jewish people didn’t recognize them.

FRANK: Jewish people don’t recognize the New Testament, either, but we accept that.  I’m just saying that if you think back to the beginning of the Church, there must have been different church leaders who had different ideas about what books did and did not belong in the Christian canon.  I’m sure that was a big issue for a while.  But the Church settled it, in councils and things, and eventually the whole Church agreed on this one canon.  Then in 1500 and something this guy Martin Luther comes along and basically says, “The Church is wrong, these seven books need to go,” and publishes his Bible without them.  I just think it’s pretty ironic that the man who started the whole Sola Scriptura thing with Protestants himself thought he had the authority to decide what should and shouldn’t be in the Bible.

CHARLES: I never thought about that.  But I’m sure there were other good reasons Luther left those books out.  I mean, he did teach that the Bible was the sole rule of faith, with no higher authority.

FRANK: I know.  And he also taught consubstantiation, that the Real Presence of Christ coexists in the Eucharist with the bread and wine.  Is that what you believe, too?

CHARLES: No, our church believes that the bread and wine at communion are just symbols.

FRANK:  So if you think Martin Luther was wrong about that, how do you know he wasn’t also wrong when he took those books out of the Bible?  All I’m saying is that if you believe in the Bible alone, you better be really certain you have an accurate and complete Bible.

CHARLES: That’s true, it is important.  And I see what you are saying. But how do you know your Bible is accurate and complete?  I mean, you don’t have infallible translators and publishers, so aren’t you in the same boat?

FRANK: Except we do have an infallible Church.

CHARLES: So you think the Church is above the Bible?

FRANK: No, I think the Church is before the Bible.  Think about it.  The Bible, as we know it now, did not exist in Jesus’ time.  Jesus and the Apostles had the Jewish scriptures.  That was their Bible.  The New Testament came later.  It took a few centuries for the New Testament to be written and the Church to determine what books belonged in it.  But even after that it was more than a thousand years before the printing press was invented and people could be reasonably expected to even have books.  And probably a couple of hundred years after that before most people could afford them, and knew how to read them.

CHARLES: I think I see where you are going.  You are saying that you believe what you do about the Bible because of what the Church teaches.

FRANK:  Exactly.  And I trust in the infallibility of the Church because she teaches with Christ’s authority.  One of my favorite theologians is St. Augustine —

CHARLES: I love him.

FRANK: –he said once, “I would not believe in the gospels if the authority of the Catholic Church did not move me to do so.”  When I first read that I didn’t know what he meant by it. But I think I do now.

FRANK: Right.  And isn’t that how we all come to faith, for the most part?  I mean, how many people check out the Bible from the library and just start reading it cold, and from that come to faith?  We are taught to believe in the Bible by our parents, our Sunday school teachers, our pastors — by people in the Church.  So really you and I are not so different.  I just acknowledge that my Church has divine authority to teach me, so I know I can trust in her teachings — including what she teaches about the Bible.

CHARLES: Well, I trust my church, too, but I trust in the Bible more.

FRANK:  So if your church taught you one thing from the Bible, and you read the Bible and think it is saying the opposite thing, who is wrong?  You?  Your church? Or maybe your Bible?

CHARLES: I don’t know man, stop bugging me with these hypotheticals.

FRANK: I’m just saying, it’s an important question!  Or I think it would be for me, if I were basing my whole belief system on how I interpret the Bible.

CHARLES: And I’m just saying my coffee is gone, and I’m running late for class.  Say, I have a test in this next class, can you please pray for me?

FRANK: Sure, but just once.

CHARLES:  Why just once?

FRANK: I wouldn’t want to be guilty of “vain repetitions” now, would I?

Charles groans and crumples up his empty coffee cup, throwing it at Frank, who bats it away.

CHARLES:  You bet.  Next time it’s your turn to buy the coffee!