7 Things to Consider When Voting Your Conscience as a Catholic 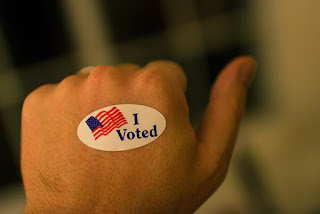 Early voting has begun here on campus, and many students will exercise their right to vote between now and official election day on Nov. 8. Here are seven things I hope my students, both Catholic and non-Catholic, will remember when they cast their ballots.

1. The Church does not endorse any political party.

This is very important. God is not a Republican or a Democrat. The Church does not endorse any political party or candidate. There is no one “Catholic party” that one can safely vote for without doing a bit of research first to see where the candidates stand on important issues.

2. Take your faith into the voting booth.

If your faith is something you only practice on Sundays, it is not true faith at all. Your faith should come to bear on every aspect of your life, in your family, among your friends, in your classes, in your workplace, and — yes — in the voting booth.
But isn’t it wrong to try to legislate our religious beliefs upon others? Yes, if we are talking about matters of theology or religious practice. It would be wrong, for example, to make a law requiring everyone to be baptized (even if we truly desire everyone to be baptized). You cannot legislate belief. But you can and should legislate morality. We do it all the time. We have laws against things like theft and murder because these things are immoral.
We tend to get uncomfortable when religion and politics seem too closely entwined, and not without reason. However, there is room for legitimate overlap. Morality is precisely that area where religion and politics overlap. Morality is all about the rightness and wrongness of human behavior. The only reason to have a law against something is because it is wrong.  This does not mean every venial sin needs to be made illegal!  However, some sinful things are so detrimental to society that, for the common good, they need to be prohibited. Where that line is drawn may vary in different times and places. This is where the prudential judgment of our lawmakers (and those who elect them) comes into play. (Read more on this subject here).

3. All moral issues are NOT equal.

A fundamental principle of morality is that we should do good and avoid evil. But we often disagree on how to do that. There are many issues of public policy where faithful people in good conscience can disagree about the best way to proceed. What sort of immigration policy is best for our country? What is the best way to address poverty in our society? What role should the federal government have in public education? In health care? These are matters of prudential judgement that good, faithful Catholics can disagree on and remain good, faithful Catholics.
On the other hand, certain actions are objectively evil — meaning that they are always and everywhere wrong — and therefore can never legitimately be promoted by law. Examples would include abortion and euthanasia (which involve ending an innocent human life), and same-sex marriage. It is immoral to perform these actions, and it is immoral to support others in doing so.  “A well-formed Christian conscience does not permit one to vote for a political program or an individual law that contradicts the fundamental contents of faith and morals” (Congregation of the Doctrine of the Faith, Doctrinal Notes on Some Questions Regarding the Participation of Catholics in Political Life 4).
Catholics and all Christians of good faith must avoid voting for any candidate who intends to support programs or laws that are intrinsically evil.

4. What if there is no “good” candidate?

What happens when each candidate promotes morally objectionable policies? Compare the policies and their moral weight. Are these matters of prudential judgment, or are these matters of intrinsic evil?  Candidates who support objective moral evils cannot be supported unless their opponent(s) support more or greater objective moral evils.  When there is no “good choice” you should vote in a way you believe will limit the harm likely to be done.

5. Is it a sin to vote for a candidate who supports an intrinsic evil?

This question is usually asked about candidates who support abortion, but it applies to support for any intrinsically evil act.  Pope Benedict XVI (when he was Cardinal Ratzinger) addressed this question in 2004.

A Catholic would be guilty of formal cooperation in evil, and so unworthy to present himself for Holy Communion, if he were to deliberately vote for a candidate precisely because of the candidate’s permissive stand on abortion and/or euthanasia. When a Catholic does not share a candidate’s stand in favor of abortion and/or euthanasia, but votes for that candidate for other reasons, it is considered remote material cooperation, which can be permitted in the presence of proportionate reasons (Worthiness to Receive Holy Communion).

6. Consider all your options.

The Catechism points out that citizens have a moral obligation to participate in the political life of their country (CCC 2239) and exercise their voting privileges (CCC 2240). However, exercising your right to vote also involves the obligation to inform yourself and to vote according to your conscience.

In this particular election cycle, some plan to vote for a third party candidate, even though they are not likely to win, due to serious moral concerns about both of the two major candidates. Some people plan to stay home on election day because they cannot, in good conscience, support any candidate on the ballot. Some plan on voting for the candidate that they consider “the lesser of two evils.”
Does a Catholic have to vote when their conscience will not allow them to support any candidate on the ballot? No.

Must a Catholic only vote for those candidates most likely to win an election, when their conscience tells them to support a third party candidate whose views are less morally objectionable?  Again, no.

You are morally responsible for voting your conscience; that may mean voting third party, voting for the “lesser evil,” or not voting at all. You are responsible for the vote you cast. Cast your vote in the way that your conscience tells you will do the most good for our society, and to the greatest extent possible does not support any grave moral evils. You should do all you can to form your conscience responsibly, but only you can determine what that means for you in the voting booth.

7. Remember: You are a citizen of a Kingdom.

People say this is the most important election of our times. They also said that last time. And the time before. The important thing — the one thing that I hope all my students remember — is that we are not to put our trust in princes.

Put no trust in princes, in mere mortals powerless to save. When they breathe their last, they return to the earth; that day all their planning comes to nothing. Happy those… whose hope is in the Lord, their God, the maker of heaven and earth… (Ps 146:3–6a).

We live in this world and so have an obligation to participate in the political life of our country. But we cannot pin our hope on any politician or political party. First and foremost, we are citizens of Christ’s Kingdom. The faithful Christian knows, at the end of the day no matter who sits in the Oval Office, that Christ is King.

Voting With a Clear Conscience