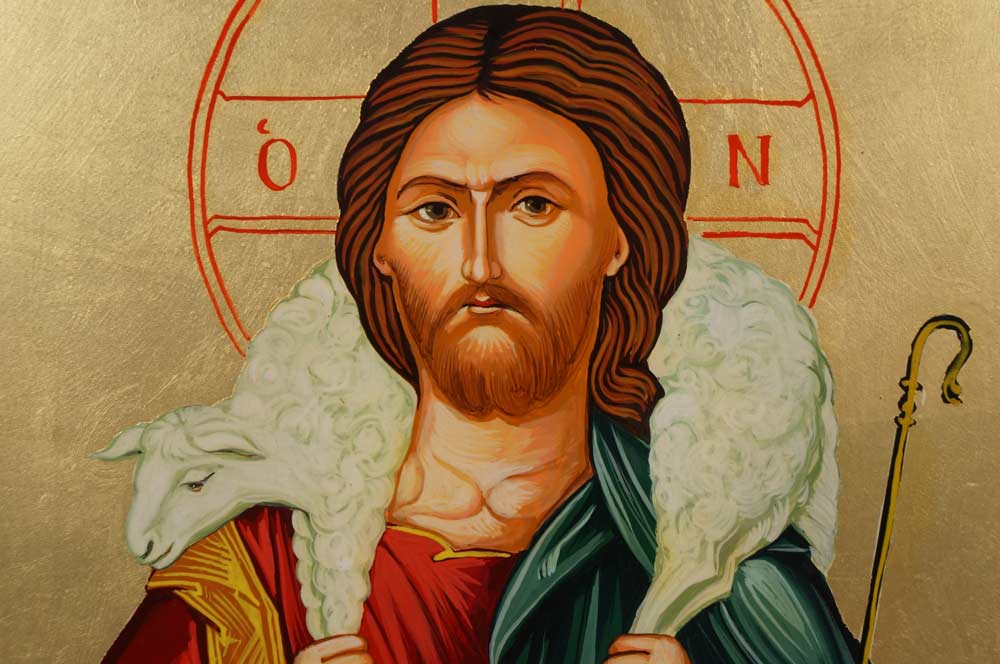 Solemnity of Our Lord Jesus Christ, King of the Universe

I never realized how many people confused sheep and goats until I started raising sheep myself. The two species are rather similar in size and build. Most people think of sheep as white and fluffy, with goats being darker and without wool. But a lot of that is the result of centuries of selective breeding. Shepherds who raise sheep for wool have created breeds that produce white wool (easier to dye different colors) and lots of it. Primitive sheep, like the kind raised in Israel in Jesus’ day, didn’t look like the fluffy sheep we see in mattress commercials. They were smaller, often darker, and less woolly, with both males and females sporting horns. In other words, they look more like goats.

My family raises primitive sheep, and people constantly mistake them for goats. “How are the goats doing?” our neighbors often ask us. Just this past week, family visiting for Thanksgiving asked us, “How many goats do you have now?” and were confused when one of our sons answered, “Zero.”

People who don’t spend a lot of time around these animals can easily mistake them. But shepherds have to know the difference. As similar as goats and sheep are, they are not the same. They have different needs. For example, goats need a certain amount of copper in their diet to survive, whereas sheep are very susceptible to copper toxicity. It can kill them. If you treat them both the same, and one will die. Shepherds have to make a distinction.

This is what we see Jesus doing in this Sunday’s gospel — making a distinction between sheep and goats. But Jesus is not talking about animal husbandry. He is talking about the final judgment at the end of time. “When the Son of Man comes in His glory, and all the angels with Him, He will sit upon His glorious throne, and all the nations will be assembled before Him. And He will separate them one from another, as a shepherd separates the sheep from the goats” (Mt 25:31-32). This will be the fulfillment of the prophesy foretold by Ezekiel, “I will judge between one sheep and another, between rams and goats” (Ez 34:17).

Of course actual sheep and goats are not subject to moral judgement because they lack reason and free will. These qualities are given to human beings made in the image and likeness of God. Our reason allows us to know the difference between good and evil, and our free will allows us to choose between them. These are divine qualities. As we have been talking about in our Credo discussions after Mass the past couple of weeks, Catholic moral teaching is based on doing what is in accord with human nature. Animals can never act against their nature because they operate on instinct. Human beings, on the other hand, have the capacity to act in human or inhuman ways. Our reason and freedom of will make us responsible for our actions. We will be judged accordingly.

While the Church teaches clearly that faith in Christ is necessary for salvation, she also teaches that we will be judged according to how we act in life. Jesus is clear that what makes the difference between a “sheep” and a “goat” is whether or not we treated others with charity.

Did we feed the hungry? Did we give drink to the thirsty? Did we welcome the stranger? Did we clothe the naked? Did we care for the ill? Did we visit those in prison? The charity we show to the least of our neighbors will be counted as service to Christ our Lord. If we fail to serve them, we fail to serve Him. It’s that simple.

Jesus makes this point in an interesting way. There are certain things that are beyond our human capacity to understand, at least in this life. This is why whenever Jesus describes the kingdom of God or heaven, He uses metaphors such as the mustard seed, or a pearl of great price, or a woman who finds a lost coin. Human language is not sufficient for telling us what heaven is, so Jesus instead tells us what it is like. So, too, with the final judgement. We can only be told what it is like.

And Jesus uses two images to describe this judgment: the king, sitting on his glorious throne, and the shepherd, separating sheep from goats. Is Jesus mixing His metaphors (something our English professors tell us not to do)? Not at all. Instead, He is revealing something about the kind of judge God is. He is a Judge that is something of both a king, and a shepherd.

Like a king, He rules over all. As St. Paul says, in the second reading, He “must reign until He has put all His enemies under His feet. The last enemy to be destroyed is death… everything is subjected to Him…” (1 Cor 15:25-27).

Like a shepherd, He tends His flock, “rescuing them from every place where they are scattered,” giving them rest (Ez 34:11-12). He leads them to verdant pastures and restful waters (Ps 23).

Jesus’ authority is supreme, but He is no tyrant. He rules with love and care. In addition to being called “Son of Man,” Jesus is also frequently called, “Son of David.” This indicates His descent in the lineage of David, the most celebrated ruler of Israel who was a shepherd before he became king.

The Solemnity of Christ the King marks the last Sunday in Ordinary Time before we begin a new Church year with Advent next Sunday. As a feast, it is less than 100 years old, being established in 1925 by Pope Pius XI, as an antidote to secularism. The Holy Father wished to remind the world that Jesus Christ’s kingly authority extends over individuals, families, societies, governments and nations. His is a universal kingship. Nothing escapes His reign. But the readings for this feast describe Jesus as a shepherd, one of the oldest images used to describe our Lord. Catacomb art dating back to the third century depicts Jesus as a youthful shepherd, carrying a lost sheep on His shoulders.

In human society, the shepherd out in his pasture, keeping careful watch over his sheep, could not be farther removed from the king sitting upon his throne in royal judgement. But in God they are one and the same.

As we approach the Advent season, when we look forward with anticipation to the final coming of Christ the King, we also look back to His first coming in a manger, surrounded by sheep and cattle, heralded by angels to watchful shepherds. Let us today, here and now, recommit ourselves to being faithful subjects of our Shepherd King.

Passing of a Campus Ministry Foundress