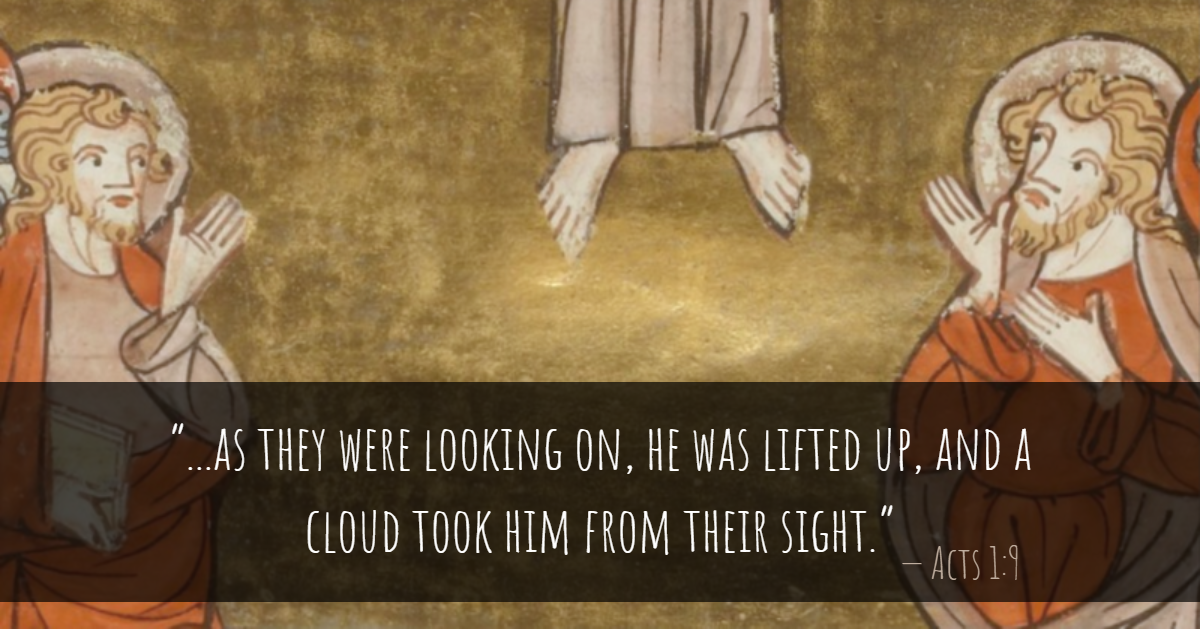 The Head Precedes the Body

The Ascension of the Lord

Why did Jesus have to leave? Our entire religion, after all, is based on the fact that this one man died two thousand years ago. But he didn’t stay dead. He is alive. He rose from the tomb, and opened for us the path eternal life. Jesus Christ now lives forever. But you can’t see him, because he ascended into heaven. You have to have faith.

Wouldn’t it be better if Christ had stuck around? Wouldn’t that make things easier? Imagine if Jesus lived in Jerusalem and was available for consultations. We’d get so many questions answered! So why didn’t God do it that way?

Well, God doesn’t do things for our convenience. Because what is convenient for us is not always what’s best for us. In fact, frequently it’s the opposite. What God desires is our good, not our convenience. And in God’s wisdom, it was better for Jesus to ascend into heaven.

But we can still learn a lot by asking why. Why is it good for Jesus to have ascended? The Church teaches us that Jesus ascended bodily into heaven. Jesus Christ is both fully God and fully man. When he ascended into heaven, he didn’t leave his humanity behind. He took his humanity into heaven with him.

This is important. Our bodies are made of physical matter. In Genesis, it says that God formed us out of dust (Gen 2:7). We are made out of the physical material of creation. And that creation is fallen.

When Adam and Eve fell from grace, all of creation fell with them. This is why our redemption doesn’t just involve the forgiveness of our sins, but also the promise of a “new heaven and new earth” (Rev 21:1). It’s in this new heaven and new earth, according to Revelation, that God will dwell forever with his people.

Jesus’ glorified humanity is not a part of this fallen creation. It’s the first fruit of the new creation. To put it simply, Jesus doesn’t belong here. And neither do we. Not those of us who have put on Christ and who have been born again into this new creation by baptism. And this is why Jesus ascended.

Christ came to earth to bring us back to heaven with him. “When I am lifted up from the earth, I will draw all men to myself” (Jn 12:32) says the Lord. Christ ascends to heaven not as God only but as God united with Man.

Humanity and Divinity are united in Christ, who now sits in glory at the right hand of the Father. If we are one with Christ, we will share in that glory with him for all eternity. “I go to prepare a place for you” (Jn 14:3) he says. We can’t ascend to heaven on our own. So Christ goes before us. As members of his Body, we can be confident that we too shall go where he, the Head, has preceded us. The head leads and the body follows.

This is why the Apostles, after witnessing Christs’ ascension, returned to Jerusalem not in sadness at Christ’s departing, but with great joy as recorded in Luke’s gospel (Lk 24:52). As members of Christ’s Body, we are heirs of that same hope; so let us share in that same joy as we celebrate the great feast of the Ascension of the Lord.