The Assumption of the Blessed Virgin Mary

Today, August 15, is the Solemnity of the Assumption of the Virgin Mary, when we celebrate our Catholic belief that Mary, the Mother of God, was assumed body and soul into heaven at the end of her life. 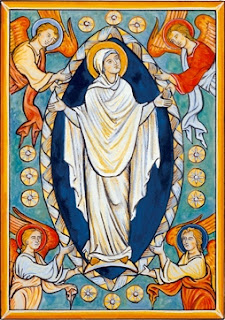 To many Protestant Christians, the Marian doctrines of the Catholic faith are the most troubling. Our devotion to her seems to them to take away from our worship of her son, Jesus Christ. The various things that we believe about Mary, that she was immaculately conceived, that she remained a virgin all of her life, and that she was assumed body and soul into heaven, all seem “non-Biblical” and therefore non-Christian to them.

It is helpful to first define just what the Assumption is and what it is not, as many who question it do so because of a poor understanding of the doctrine. When Pope Pius XII defined this doctrine infallibly, he wrote that “at the end of her earthly life [she] was assumed body and soul into the glory of Heaven.” Note that the Pope is silent on whether or not she actually died. Most theologians are in agreement that she did, in fact, die a normal death. But the Church has not defined the issue one way or another.

Sometimes questioners will claim that “that this was not a Catholic doctrine until 1950.” It is true that this particular doctrine of faith was not defined until 1950. But there is a big difference between “define” and “invent.” Beliefs and practices can be around a long time before they are officially defined. Most often, the Church waits until the need is present before it will make an official proclamation on a subject. In fact, the dates of the definitions of various doctrines usually correspond to the first time the doctrine is widely questioned (and thus the need for a formal definition), not when it was first believed.

We can look at early church records and see that the Assumption of Mary (or the Dormition of Mary, as it is called in the East) is a very ancient belief of the church. The earliest known written reference to the Assumption can be found in the text De Obitu S. Dominae, which dates to the fourth or fifth century but has been attributed to St. John the Evangelist. In the East, it is mentioned in the sermons of many early Fathers including St. Andrew of Crete, St. John Damascene, St. Modestus of Jerusalem and others.

In 451 AD, at the Council of Chalcedon, the Emperor Marcian said he wanted to own the body of Mary, the Mother of God.  St. Juvenal, Bishop of Jerusalem, told the Emperor, “Mary died in the presence of all the Apostles, but that her tomb, when opened, upon the request of St. Thomas, was found empty; wherefrom the Apostles concluded that the body was taken up to heaven.”

The Assumption of Mary has been celebrated since early times with a feast day. In fact it is the oldest Marian feast on the Church’s calendar. We do not know exactly where or when this celebration first occurred, but according to the life of St. Theodosius (d. 529) it was celebrated in Palestine before the year 500, probably in August. It has been celebrated at other times of the year in various places, however, such as in Egypt and Arabia, where it was observed in January. By 700 it was one of the principle feasts in Rome, and was a Holy Day of Obligation.

Many will argue that Mary’s Assumption is not mentioned in the Bible. In Genesis, Enoch is said to have been assumed into heaven, and the same goes for Elijah in 2 Kings. So if Mary was assumed, then wouldn’t this event have warranted mention in the Bible?

On the face of it, this argument seems to hold weight. There are no express Scriptural proofs that show the validity of this doctrine. But as Catholics, we don’t believe in the Protestant doctrine of Sola Scriptura — that the Bible is our only rule of faith. We also believe in the living, infallible, teaching authority of the Church. It is important to point out that nowhere in the Bible does it exclude the possibility of the Assumption. In fact, Matthew 27 describes a scene where “graves were opened, and many bodies rose out of them, bodies of holy men gone to their rest: who, after his rising again, left their graves and went into the holy city. . .” This, along with the Old Testament examples of Enoch and Elijah, certainly suggests that such a thing as the Assumption is possible.

If one were to look to the Scripture for references to Mary’s Assumption, the best place to look is the book of Revelation, chapter 12.

“And a great portent appeared in heaven, a woman clothed with the sun, with the moon under her feet, and on her head a crown of twelve stars; she was with child and she cried out in her pangs of birth, in anguish for delivery. And another portent appeared in heaven; behold, a great red dragon, with seven heads and ten horns, and seven diadems upon his heads. His tail swept down a third of the stars of heaven, and cast them to the earth. And the dragon stood before the woman who was about to bear a child, that he might devour her child when she brought it forth; she brought forth a male child, one who is to rule all the nations with a rod of iron, but her child was caught up to God and to his throne. . .”

Commentators identify the dragon as Satan, and the child as Christ, so it makes sense that the woman should be identified as Mary. John’s vision of Mary in heaven with her son, Jesus, only makes sense if she had been Assumed into heaven, as Pope John Paul II as well as Pius X have stated. And this is exactly what the Apostles believed happened at the end of her life.

Where Are The Relics?

In fact, the absence of a body, or any remains at all, attributed to Mary speaks volumes. The Biblical silence on her assumption is neither an affirmation or a rejection of the fact–it is simply silence. But the silence of anyone claiming to have, or have seen, her earthy remains is worth noting.

From the very beginning of the Church, Catholics have had a special veneration for the relics of holy people. The bones of Christians killed in the Coliseum were gathered up and preserved almost immediately, according to the biographies of those first holy martyrs. Cities would vie for the claim to fame of being the final resting place of a famous saint. For some of the more famous saints, the bones were even divided up so that more than one town could claim them. These relics were preserved and venerated and were objects of great devotion. Surely the relics of Mary, the most revered of all the saints, would be preserved and venerated more than any other. Yet no city anywhere has ever claimed her remains.

We know she lived for a while in Ephesus with John and may have died there. There is also a good case that she may have died at Jerusalem and her temporary tomb is said to be there. Yet neither of these cities claims or has ever claimed to have her physical remains. Nowhere are her bones venerated. Why not? Because there were no remains to venerate and the people of the time knew it.

Mary’s Assumption cannot be explained without also considering the doctrine of her Immaculate Conception. I cannot give that doctrine a full treatment here, but it states that Mary was conceived without the stain of original sin. From her conception she was set aside, chosen by God, to be the New Eve, the one to bear Christ to the World. 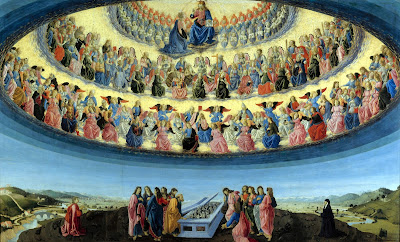 Death and decay are the punishments for original sin, and since Mary was free from original sin, she was free of its consequences. So why did she die? Indeed, we don’t know for certain that she did, but if she did it was because she was united with her Son, who though sinless, suffered death. It was her desire to do the will of God, and as Christ died for our sins so that we may be redeemed, she desired to also share in His sufferings.

But God would not allow her body, free of sin, to become corrupt. Just as we all one day hope to be reunited with our physical bodies in heaven, Mary’s hope was realized immediately as body was taken into Heaven along with her soul. Her assumption gives us a glimpse of the final destination we all hope for in Christ.

This doctrine of the Church was proclaimed infallibly by Pope Pius XII in the Bull Munificentissimus Deus, 1 November, 1950. It was re-emphasized at the Second Vatican Council in the Dogmatic Constitution Lumen Gentium that “the Immaculate Virgin, preserved free from all stain of original sin, was taken up body and soul into heavenly glory, when her earthly life was over, and exalted by the Lord as Queen over all things.”

“All generations shall call me blessed; for he who is mighty has accomplished great things on my behalf.” – Lk 1:48, 49
Communion antiphon for the Solemnity of the Assumption of the Virgin Mary