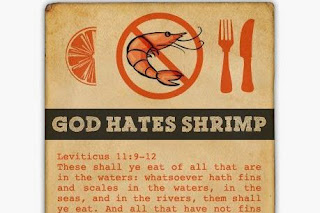 Are you a hypocrite for being against homosexual marriage if you also eat bacon or shrimp?  If you are scratching your head and thinking, “huh?” right now, then you probably haven’t seen the arguments making the rounds on the inter-web claiming that Christians who are against same-sex marriage are either hypocrites or ignorant of their own faith..

The argument goes like this.  Leviticus 20:13 forbids homosexuality.  But Leviticus also forbids eating shellfish (Lev 11:9-12), and pork (Lev 11:7).  So if you are against gay marriage but enjoy eating either of those things, you are either a hypocrite or don’t know the Bible.  Leviticus also forbids wearing clothing of mixed fibers (Lev 19:19), so if your shirt is a poly-cotton blend and you are against gay marriage, you are in the same boat.  The same applies if you have a tattoo, which is also verboten (Lev 19:28).

The point of these arguments is twofold.  It seeks to downplay the moral gravity of homosexual acts by putting them on par with outdated dietary restrictions.  Simultaneously, it aims to get Christians to feel ignorant of the Bible so that they will reexamine their moral beliefs and hop onto the sexually permissive bandwagon.  The assumption behind the argument is that Christians in general don’t really understand the basis of much of what they believe.  One graphic I saw representing this argument ended with the admonition, “Before joining a major religion, you should really read all the paperwork.”

The sad thing is, that assumption is likely correct.  A lot of Christians are ignorant of the Bible and many other aspects of their faith.  But for those who do know their stuff, this sort of argument comes across as very insulting, presuming that the Church has never read Leviticus.  I am reminded of the “shocking” report in Salon earlier this year revealing that Jesus descended into hell, a fact, “churches would rather not acknowledge.”  Of course any Christian familiar with the Apostles Creed would be embarrassed for the reporter who made such a public display of her ignorance of Christianity.

Those making the “shellfish and bacon” argument for same-sex marriage are equally ignorant of the Christian teaching.  The first mistake is presuming that Christian moral teaching is based on making a list of what the Bible does and does not forbid.*  In reality, Christian morality is not based on the Bible, but on the natural law.  More on that later.

But what are we to make of all the things forbidden in Leviticus that Christians regularly do today?  Are we being unfaithful to God’s word?  It is important to understand just what Leviticus is and what it is not.  Leviticus is the third book in the Old Testament, coming after Genesis and Exodus.  Exodus chronicles, among other things, Israel’s infidelity to their covenant with God.  Because of this, God makes some changes to His plan for His chosen people, including the legal code given in Leviticus.

You can draw some parallels with parents who have to be increasingly strict with a disobedient son.  If the son is respectful to his father and mother, loving toward his siblings, and generally a good kid, the parents will need very few household rules.  But if the son acts up all the time, is disrespectful and disobedient, mom and dad will need to establish more rules to teach him how he ought to behave.  In a like manner, God’s original plan for mankind was not one of following long lists of rules, but simply living in loving relationships with God and with each other.  When we showed our disobedience, our Father who art in heaven needed to apply some stricter rules.

Those rules were useful for teaching the chosen people about God’s will and establishing a little discipline, but the rules in and of themselves were not sufficient.  They were tools to help us grow and not meant to be everlasting.  Once the child is grown, the parents’ rules are no longer enforced.  Either the son has learned his lesson and grown into a loving, respectful man, or he has not and will face the consequences of his selfishness as an adult.  The same is true in our faith.  In the fullness of time (Gal 4:4), God sent His Son into the world — not to abolish the law but to fulfill it (Mt 5:17).  In other words, Jesus does not tell us that the old rules are all wrong.  But He does expect us to follow the greater moral truth upon which they are based.

Far from tossing the old law out the window, Jesus shows us what is at the root of the commandments — love of God and love of neighbor (Mt 22:37).  For example, He instructs us that it is not enough to simply not commit adultery.  We should not even look at another with lust in our hearts (Mt 5:28).  It is not enough to simply not kill, but we should not hate (Mt 5:22).

For some commandments of the old law Jesus seems to actually be more strict.  This is especially true regarding marriage.  For example, divorce was tolerated under the old covenant.  Not so with the new.

And the Pharisees came up and in order to test [Jesus] asked, “Is it lawful for a man to divorce his wife?”  He answered them, “What did Moses command you?” They said, “Moses allowed a man to write a certificate of divorce, and to put her away.” But Jesus said to them, “For your hardness of heart he wrote you this commandment.  But from the beginning of creation, ‘God made them male and female.’ ‘For this reason a man shall leave his father and mother and be joined to his wife, and the two shall become one flesh.’ So they are no longer two but one flesh.  What therefore God has joined together, let not man put asunder” (Mk 10:2-9).**

So Jesus seems to be ramping up the requirements of the law in many respects.  But what about all those restrictions in Leviticus we no longer follow.  Most Christians I know eat bacon and shrimp, wear poly-cotton clothing, and a few even have tattoos!  Are we all going to hell for ignoring the laws of God?  Has all of Christianity somehow managed to forget whole chunks of the commandments?  Not surprisingly, the answer is no.  As it turns out, this very matter was dealt with pretty early on in the Church, by none other than the Apostles themselves.  You can read about it, as a matter of fact, in the Bible (you know, that book that we Christians are supposedly ignorant about).

In Acts 10 you can read about Peter receiving a vision from God showing all the different kinds of animals the Jewish people were forbidden to eat.  God told him, “What God has made clean, you are not to call profane” (Acts 10:15).  Lest Peter miss the message, God repeated this three times.  In Acts 15 we read about the Apostles gathering in Jerusalem, deciding (under the guidance of the Holy Spirit) that it is not necessary for converts to Christianity to observe the Mosaic law, including circumcision for the males.

What is going on here?  Why are some laws of the Old Testament retained, and even intensified, while others are done away with?  What is the difference?  Those laws which remain are those which pertain to the natural law.  Jesus, talking about marriage above, makes reference to “the beginning of creation” and then quotes from the book of Genesis.  In other words, Christ is referencing a law that was written into human nature itself as a part of creation.  This is different than the disciplinary laws later imposed by God.  In Romans 2:15, St. Paul talks about the Gentiles (non-Jews) having the law of God “written upon their hearts.”  In other words, even non-Jewish people who did not have the benefit of God’s revelation were still expected to abide by this natural law and would be judged accordingly.

The question is, are the prohibitions against homosexual acts in Leviticus part of this natural law, that has been written into our nature from the beginning?  Or are they, like the dietary and ritual laws of the old covenant, now obsolete, having been fulfilled in Christ?

Again, we can look to St. Paul, who wrote most of the New Testament.  While Paul is adamant about Christ having “ransomed us from the curse of the law” in Galatians 3, he certainly understood homosexual acts to be incompatible with a Christian understanding of sexual morality.  Paul condemns homosexual acts three times, in Rom 1:26-27, 1 Cor 6:9, and 1 Tim 1:9-10.

There is much in Leviticus forbidden by God besides eating pork and shellfish.  Adultery, incest, and bestiality are also forbidden (in the same section forbidding homosexual acts).  Yet no one is making the claim that these restrictions, too, should be cast aside because we now eat pork.  We correctly understand these moral imperatives to be of a different order.  Dietary and ritual laws are disciplinary in nature.  Other commandments, including those dealing with sexual morality, are part of our human nature and so are perfected, not abolished, with the coming of Christ.

Of homosexuality, the Catechism teaches, “Basing itself on Sacred Scripture, which presents homosexual acts as acts of grave depravity, tradition has always declared that homosexual acts are intrinsically disordered.  They are contrary to the natural law.  They close the sexual act to the gift of life.  They do not proceed from a genuine affective and sexual complementarity.  Under no circumstances can they be approved” (CCC 2357).

It then goes on to say, “Homosexual persons are called to chastity,” and reminds us that their goal is the same as everyone else’s, namely “Christian perfection” (CCC 2359).  That cannot be achieved, though, by ignoring God’s word, or pretending that part of God’s word does not apply to a certain segment of people.  That cannot be achieved by encouraging behavior that is counter to our human nature and dignity, or accepting sexual acts that run counter to the very meaning and purpose of human sexuality.

This is a complex issue.  More accurately it is a simple issue made complex by the overarching sexual ethos currently accepted by our society which runs counter in so many ways to traditional Christian morality.  It is a matter which ought to be discussed with openness, honesty and charity.  That is not achieved by straw-man arguments like the above.  Let’s concern ourselves less with what God thinks about shellfish, pork, or polyester shirts, and more with what He thinks of you and I, and how we each in our own lives can grow in our vocation to chastity and so grow closer to that goal of Christian perfection.

*Admittedly, I am sure there are Christians out there who really do base their views of sexual morality on literal readings of Leviticus, and perhaps those people should feel a bit called out by these arguments.  But these views do not represent the greater tradition of Christian moral teaching based on the natural law.

**Those who claim Jesus never said anything about the matter of same-sex marriage should read this passage carefully.