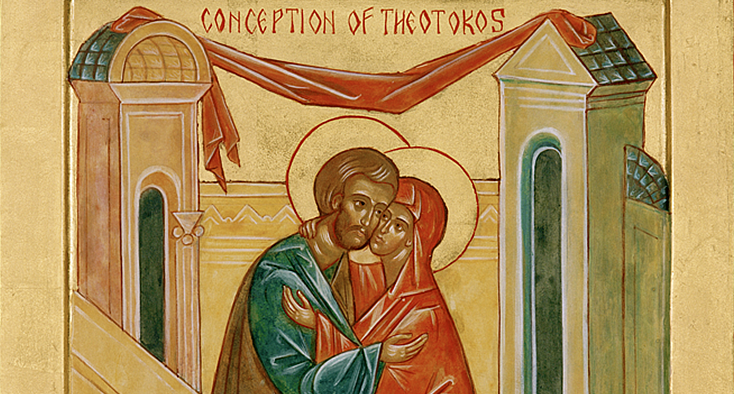 On the Immaculate Conception

The Solemnity of the Immaculate Conception of Mary is celebrated on December 8 every year.

We believe that this conception took place in the usual natural way, but that by a special grace of God, Mary was conceived without original sin.  In other words, she was conceived and lived her life in the same state of blessed friendship with God that our original parents, Adam and Eve, enjoyed before the Fall.

The doctrine of the Immaculate Conception was officially defined and proclaimed in 1854 by Pope Pius IX:

“We declare, pronounce, and define that the doctrine, which holds that the most Blessed Virgin Mary in the first instant of her conception, by a singular grace and privilege granted by Almighty God, in view of the merits of Jesus Christ, the Savior of the human race, was preserved free from all stain of original sin, is a doctrine revealed by God and therefore to be believed firmly and constantly by all the faithful” (Ineffabilis Deus).

Because this definition was formally given to the Church in 1854, some mistakenly assume the belief only dates back to the mid-nineteenth century, and is therefore historically suspect.  However, the belief in Mary’s Immaculate Conception in fact dates back centuries before this proclamation.

It has its roots in the New Testament.  We find the greatest support for this doctrine in Luke 1:28, where the angel Gabriel calls Mary “full of grace.”  In the original Greek, the word is kecharitomene, which St. Jerome translated into Latin as gratia plena.  But the Greek word has a meaning deeper than the Latin or English might at first suggest.  Kecharitomene is the perfect passive participle of the verb charitoo.

The Greek indicates a perfection of grace.  A perfection must be perfect not only intensively, but extensively.  The grace Mary enjoyed must not only have been as ‘full’ or strong or complete as possible at any given time, but it must have extended over the whole of her life, from conception.  That is, she must have been in a state of sanctifying grace from the first moment of her existence to have been called ‘full of grace’ or to have been filled with divine favor in a singular way.  This is just what the doctrine of the Immaculate Conception holds (Keating, Catholicism and Fundamentalism, 269).

The writings of the early Church Fathers are full of references to Mary’s absolute purity.  Perhaps the most famous is St. Augustine, who in his writings against Pelagianism said that all have known sin “except the Holy Virgin Mary, of whom, for the honor of the Lord, I will have no question whatever where sin is concerned” (On Nature and Grace 36).

Nor is the belief in Mary’s Immaculate Conception a purely Catholic one.  No less of a Protestant than Martin Luther himself wrote, “She is full of grace, proclaimed to be entirely without sin… God’s grace fills her with everything good and makes her devoid of all evil… God is with her, meaning that all she did or left undone is divine and the action of God in her.  Moreover, God guarded and protected her from all that might be hurtful to her” (Personal Prayer Book, c. 1522).

Another myth concerning the Immaculate Conception is that this doctrine means Mary did not need a savior; in other words, she did not need Christ.  This would mean that Christ did not die for His mother, Mary, and His sacrifice did not redeem her.  Again, this is not what this doctrine means at all.  In fact, in the very definition of the doctrine, Pius IX clearly states that this special grace given to Mary was because of “the merits of Jesus Christ,” and that Christ is “the savior of the human race,” which includes His mother.

But how could Mary be saved by her Son on the cross before Jesus was even born?  We must remember that God does not operate in time as we do.  God exists in eternity.  Jesus Christ exists in and from eternity.  God is outside of time and therefore not bound by time.  Rather than not being saved by her Son, Mary was in fact the first one saved by Jesus.  How fitting that Christ, who loves Mary more than any human son has ever loved his mother, desired to save her from sin from the very moment of her conception.

But if Mary was never subject to original sin, can she really be said to have been “saved” from sin?  She was never suffering from sin to begin with, so how can she be “saved” from it?  Think of two people walking towards a pit in the ground.  The first falls in the pit and cannot climb out on his own.  Another person comes by with a ladder and lowers it into the pit, allowing him to climb out.  That person has been saved from the pit.

The second person also walks towards the pit, but this time, before he falls in, someone comes along and grabs the back of his shirt, pulling him back from the edge, so that he never falls.  Has this person not also been saved from the pit?

Mary’s salvation by Christ is like the second example.  She never fell into sin, but this preservation in grace was due to the salvific work of Christ.  And why would Christ save His mother in this special way?  It is so that His mother might not only be the first one saved by Him, but also the one saved most perfectly, most completely.  It is so that she can be the preeminent example of holiness for all Christians.  It is so that she can more completely show, through her life and her person, the way to her Divine Son.

For, like all other Marian doctrines, its purpose is not so much to teach us about Mary, but to teach us about her Son.  Mary was prepared by God, from the moment of her conception, to receive Christ into her womb.  Let us pray today that we may prepare ourselves to receive Him into our hearts this Advent.