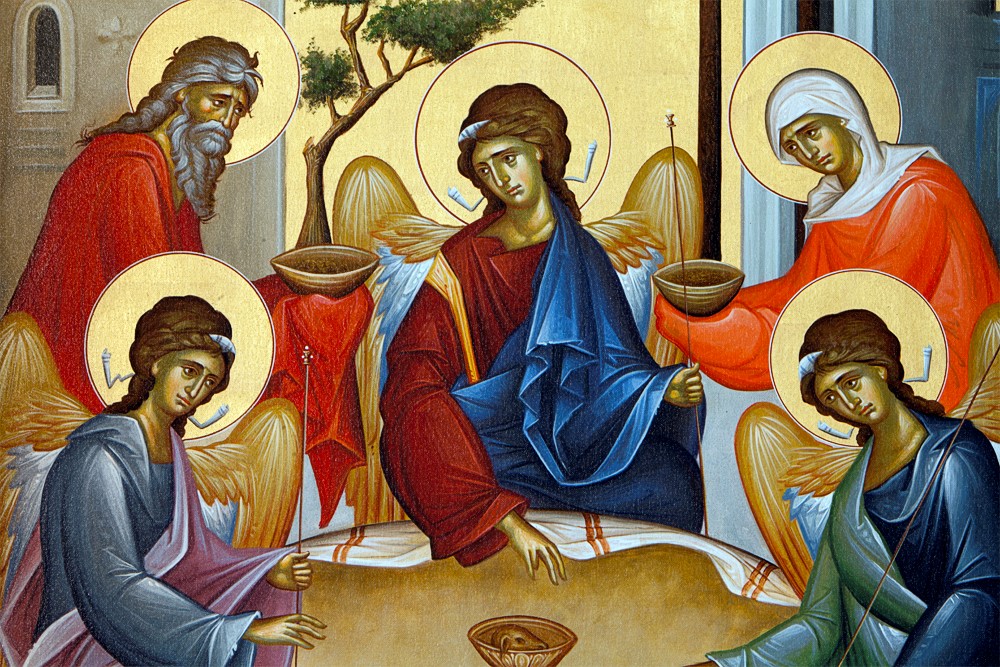 Solemnity of the Most Holy Trinity

The Trinity is something most Catholics learn about at some point during their faith formation, prior to Confirmation. The basics are not hard to grasp. The Father is God. The Son is God. And the Holy Spirit is God. They are the same God, not three different gods. The classic formula is “One God in Three Persons,” meaning the three Divine Persons share the same being or essence. Simple enough to learn. Impossible to truly comprehend. It is a deep mystery.

For many of us, therefore, the doctrine of the Holy Trinity might seem somewhat irrelevant. We can maybe appreciate how it provides theologians something to study and mystics something to ponder in awe. But we don’t see how it has any relevance to our own lives and daily struggles. Most of us are not called to be theologians or mystics (though no doubt each of us could benefit from incorporating a bit more theology and mysticism in our lives). So when Trinity Sunday rolls around, we may wonder what’s this got to do with me?

Everything, as it turns out.

To explain how, I want to first go back to the daily Mass reading from this past Friday. The gospel was taken from Mark 10:1-12. This is the passage where the Pharisees ask Jesus whether it is lawful for a man to divorce his wife and marry another. Jewish law permitted this, and the Pharisees know it. They are trying to set Jesus up. If they can get Jesus to condemn the practice, like John the Baptist did, then perhaps Jesus would meet the same fate as John. King Herod had John imprisoned and killed for speaking out against his marriage to Herodias (both of whom abandoned their previous spouses to marry one another).

So how does Jesus answer their question? He admits Moses did allow for divorce and remarriage. Permission is granted for this in Deuteronomy (Deut 24:1-4). But he then says, “For your hardness of heart he wrote you this commandment” (Mk 10:5). Jesus reminds them that it was not originally this way.

Deuteronomy means “second law.” It was handed down some 40 years after the law in Leviticus, and contains many concessions not permitted in Leviticus, including divorce. Deuteronomy was a less perfect law embodying a lower standard of faithfulness for the people of Israel. As Jesus tells us elsewhere in the gospels, he did not come to abolish the law, but to fulfill it (Mt 5:17). Jesus calls us to a higher standard. This is seen, for example, in Matthew chapter 5 when Jesus teaches it is not enough to refrain from adultery and murder; we must also refrain from lust and hatred. Jesus perfects the law.

In perfecting the law of marriage, Jesus draws our attention back before the Dueteronomy and Leviticus. He takes us to the very beginning — as C. S. Lewis might put it, to a “deep magic from the dawn of time,” or what St. Paul calls the “law written on our hearts” (Rom 2:15).

But from the beginning of creation, God made them male and female. For this reason a man shall leave his father and mother and be joined to his wife, and the two shall become one flesh. So they are no longer two but one flesh. Therefore what God has joined together, no human being must separate” (Mk 10:6-9).

Jesus takes us back to Genesis (quoting Gen 1:27 and 2:24), and the primordial law given to us as part of human nature. He bases his teaching on marriage not on the Law of Moses, but on the Law of Creation, the Law of Human Nature, the Law that God wrote into our very being — what Pope St. John Paul II would later call the “Theology of the Body.”

Jesus is saying, God made you male and female, and this is the reason why; so that you can give yourself as gift to one another. This self-gift is meant to be total and complete. It is meant to be such a profound gift of self that the two become one flesh. Since husband and wife are no longer two, but one, then of course they cannot separate. This gift of self is permanent, not temporary. It is full, not partial. Nothing must be held back.

By rooting his teaching on marriage in the very nature of the human person, Jesus not only teaches us about what marriage is but about who we are. We are made to give ourselves to others.

This call to give ourselves to others can manifest itself in ways other than marriage. Some are called to celibate lives. But celibacy is not an excuse for selfishness. Rather celibacy is a special calling that enables us to give ourselves to others in different ways than marriage typically allows for. Priests, those in religious orders, and those in the consecrated single life give themselves in service to the Church and the world in many and varied ways. Even those temporarily living lives of celibacy (still open to marriage) are called to find ways to give themselves in love and service to their family and community.

But marriage is different. It is the vocation written into our nature. Our very bodies teach us that we are made to give ourselves to another. This is because we are made in the image and likeness of God.

The fact that we are made male and female reflects something of the image of God in us — and that is precisely this call to give ourselves to another, and to receive the other as gift. And this is where Trinitarian doctrine enters the picture.

The doctrine of the Trinity teaches us that the nature of God is to give and receive the gift of self. This is the image in which we were made.

The self-gift to which I am referring is not something one person gives to another. It is more radical than that. It is the gift of one person to another. The person is the gift. This is why is must be a gift of self, because the only person we are free to give is our own. This happens perfectly in the Trinity, but it is also the model for human love.

Jesus speaks of marriage in terms of husband and wife being no longer two, but “one flesh.” Now listen to how he talks about his own union with God the Father.

This is the Church’s teaching about the Trinity, the inner life of God. God the Father and God the Son are so united that everything the Father has is possessed by the Son, and everything the Son has is possessed by the Father. God the Father gives himself completely to the Son, who also gives himself completely to the Father. They are so united as to be one in being (consubstantial, as we recite in the Nicene Creed), which literally means “of one substance” or “one essence.”

In fact, the self-giving love shared by the Father and Son is so profound that it also shares in the Divine Existence as the Third Person of the Trinity, the Holy Spirit. God’s love is generative. And it is also creative, which is why you and I are here.

We didn’t have to be. God doesn’t need us. He has within his own divine being perfect communion — Love, Lover and Beloved. He needs no one. But self-giving love possesses another quality, and that is its fruitfulness. It is life-giving. It bears fruit beyond itself. And so God made the heavens and the earth, and all that dwell therein. And he made you and I in his image. And he commands us to love one another, to be fruitful, and to multiply.

The Trinity is not a closed circle. The life of self-giving love that is God’s inner life is not something he holds in isolation. It is something God greatly desires to share. The love between Father, Son and Holy Spirit is the same love that God has for us.

Jesus is often spoken of as the Bridegroom, and the Church as the Bride of Christ. A careful reading of the Old Testament reveals God relating to Israel in terms of a marriage covenant. He speaks of Israel as his bride. When she worships other gods (often called ba’al, an ancient Semitic word meaning “lord” or “husband”) God rebukes her for infidelity. Yet God himself remains faithful, and always takes Israel back as his own. (For more of this Old Testament language expressing the spousal nature of God’s relationship with Israel, see Ezekiel 16 or the Song of Songs).

In the New Testament we see just how fully God desires to give himself to us as a groom gives himself to his bride. God divests himself of his divinity to become Man. He suffers and dies for us, giving us his very life. He gives himself to us in the Eucharist, so that we can receive his body into our own. The very intimate marital aspect of the Eucharist is why the Mass is often referred to as “the marriage supper of the Lamb” (Rev 19:6-9).

Through the sacrament of matrimony, husband and wife are made icons of Christ’s love in the world. Marriage reminds us that we are each called to give ourselves to another. Married people are called to give themselves fully, permanently, and exclusively to their spouse in a fruitful and loving relationship. This is the sign. The reality it points to is that each and every one of us is called to give ourselves fully, permanently, and exclusively to God in a fruitful and loving relationship — and to receive openly God’s total gift of himself to us.