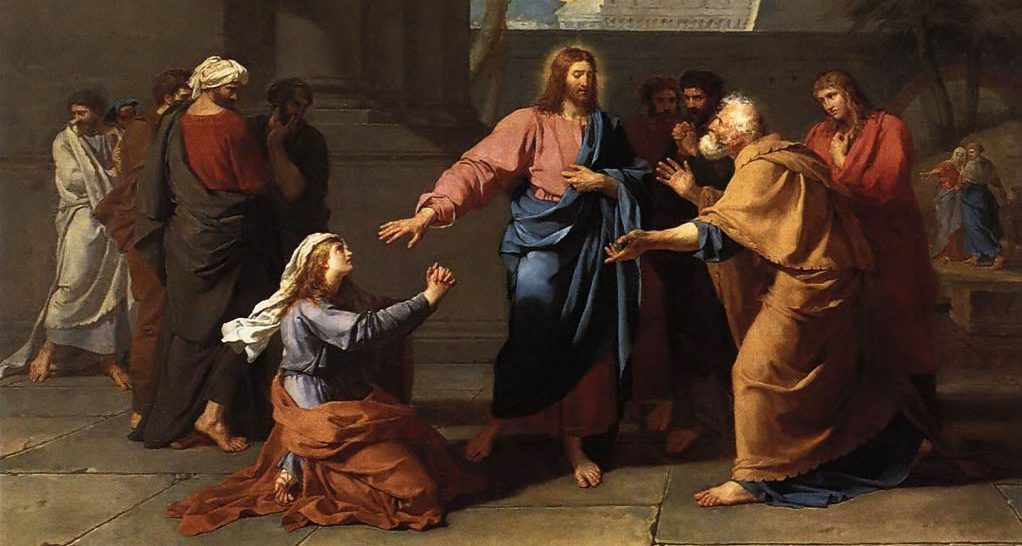 A House of Prayer for All People

20th Sunday in Ordinary Time (A)

I haven’t been online much this past week. Part of the reason is that I’ve been busy preparing for the return of students to campus (welcome to all the new students reading this). But another big reason is that, frankly, seeing what’s going on in the world right now is depressing. Americans are marching with Nazi flags as a sign of “patriotism.” People are running over with their cars those who don’t share their point of view. It makes one wonder, What’s wrong with the world?

I’ve had that question put to me a couple of times this past week by students returning early to campus. They should be worried about getting settled into their dorm rooms and figuring out where all their classes are. Instead they are worried about the state of our country and our culture. They are distressed. They have a looming sense that there is something deeply wrong in our society. What is it?

I don’t just mean the sin of racism. Racism is a most definitely a sin. Just in case there is any confusion on this issue, the Catechism of the Catholic Church calls racism “a violation of human dignity” and “a sin against justice” (CCC 1935). Let me say this in no uncertain terms: one cannot be a faithful Catholic and a racist. We believe every human being is made in the image and likeness of God, and is beloved by God.

To strive for holiness we must become more like God. God is love. And love, by its very nature, seeks union with the other. To love is to move beyond self and recognize the good of the other; it is to pour one’s self out for the other. The ultimate example of God’s love is Christ, emptying Himself totally for us on the cross — even those of us who were hammering the nails into His wrists.

What we are experiencing in the world today is a devaluing of holiness. When was the last time, outside of church, you heard anyone talk about pursuing virtue? If you asked your friends and family about their primary goal in life, how many would you expect to answer, “To be holy?” It’s not that we are trying to be holy and struggling. We’ve just stopped trying. (G. K. Chesterton famously quipped, “Christianity has not been tried and found wanting; it has been found difficult and not tried.”)

We’ve given up on holiness and virtue, and so its no surprise that we’ve also given up on love. We still say we value love. But we no longer know what love is. We advocate for sin in the name of love. Holiness means loving God and neighbor. Sinfulness means just loving ourselves. Love of self above all others leads to depression and despair. We become bitter and angry, unable to see beyond our own egos. Anything that offends us must be stamped out.

All sin is selfish, and selfishness is divisive. Sin separates us from God, but also from one another. It predisposes us to see the world in terms of “us” and “them.” Black and White. Jew and Gentile. Native and Immigrant. Gay and Straight. Rich and Poor. Republican or Democrat.

This Sunday’s scripture readings condemn this sinful division. We begin with the prophet Isaiah. Even though Israel has been singled out as “God’s chosen people,” here Isaiah prophesies that even foreigners who join themselves to God will be found acceptable by Him. God says, “my house shall be a house of prayer for all peoples,” not just the nation of Israel.

This prophesy, like all Old Testament prophesies, is fulfilled in Christ, who born into a Jewish family redeemed all mankind. The Church Jesus established is not a national Church, or a tribal Church, but a Catholic (universal) Church. This is why Paul became the Apostle to the Gentiles, to bring the message of God’s forgiveness and reconciliation to the world beyond the Jewish people.

Paul is the same Apostle who in another letter wrote that in Christ there is no Gentile or Jew, no slave or free, no man or woman (Gal 3:8). It took even Jesus’ closest followers some time to understand this important point. Jesus sometimes was at great pains to teach this lesson. Perhaps the best known example is the parable of the Good Samaritan, but in this Sunday’s gospel, Jesus teaches not by a parable, but by living example.

He encounters a Canaanite woman. Canaanites were often enemies of the Jews. This woman seeks out Jesus because her daughter is possessed by a demon. Like any distressed mother, she is willing to do anything to help her child, even humble herself to beg mercy from a Jewish prophet. In the gospel reading, we get the feeling that the disciples consider her an irritant. She’s an “other.” She shouldn’t be here. They ask Jesus to send her away.

Jesus seems at first to play along. He says He was only sent to the lost sheep of Israel and even calls the Canaanite woman a “dog.” This is one of those instances when we must be careful not to take Jesus out of context. He says, “It is not right to take the food of the children and throw it to the dogs,” not because He considers the Canaanites unworthy of His mercy, but because this is what the disciples themselves where thinking. Jesus was giving voice to the selfish and divisive thoughts of the disciples’ hearts.

For what end? To prove them wrong.

By persisting in her petition even in the face of such demeaning rejection, the Canaanite woman demonstrates a faith greater than the Jewish disciples — God’s own chosen people — possessed. Jesus grants her request and her daughter is healed. By His actions, Jesus shows His love for all people. He didn’t see a Canaanite or an Israelite. He didn’t see an “us” and a “them.” He saw only a woman in need, a person whom He loved, humbly asking for His mercy. Jesus, by His actions, demonstrates to the disciples and to us, that His kingdom will be a house of prayer for all peoples.

Please be assured at the start of this new academic year, that Catholic Campus Ministry at WCU is a house of prayer for all peoples. We don’t care if you are white, black, Asian, Hispanic, Jewish or Canaanite. We don’t care whether you are rich or poor, male or female, fat or thin, outgoing or shy. We are a house of prayer for all people. This is not because of some special agenda we have. It’s not because we advocate a certain political program or platform. It’s because we are Christian.

The Catholic Church, wherever it is found across the world, in every place and nation, is a house of prayer for all peoples.