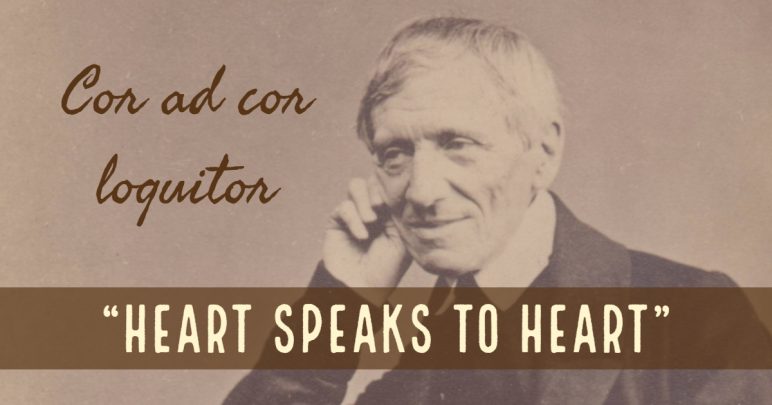 We’ve been learning a lot about John Henry Cardinal Newman this past week as we prepare to celebrate his canonization by Pope Francis this coming Sunday, October 13. As I mentioned in my homily last week, Newman is considered to be the patron of Catholic campus ministry because of his advocacy both for faithful Catholic universities and also for a strong Catholic presence on the campuses of secular universities.

For this reason, many campus ministry centers are called “Newman Centers” in his honor. The first Newman Center in the US was established in 1893 (only three years after Newman’s death) at the University of Philadelphia. Even though we don’t use the name “Newman Center” (the name “Catholic Campus Ministry” is more straightforward and recognizable by our non-Catholic brethren here in the south), we still consider ourselves very much under the spiritual patronage of Cardinal Newman.

Last Wednesday night, our peer ministry program focused on getting to know soon-to-be Saint John Henry Newman a little better. One thing that struck me as I listened to the student presentation was just how much Newman has to teach us about evangelization.

Even though Newman risked his career and reputation by leaving the Anglican ministry to become Catholic, he would go on to have a huge impact on an impressive number of people. Dr. Hahn reports that Newman wrote over 21,000 letters, and that the people who converted to Catholicism due to their correspondence with him included 636 noblemen, 700 members of the clergy, along with 1100 of their wives and children, 700 professionals and 800 artists. No fewer than 612 men became priests due to his influence and 164 women entered religious life. Not a bad record.

There is no doubt that Cardinal Newman was a hugely successful evangelist. And here’s another thing that struck me from that Wednesday night presentation — this photo of Cardinal Newman’s writing desk.

All of the success Cardinal Newman had as an evangelist was done with pen and paper. He had no laptop or iPad. He had no social media accounts. His sermons were not broadcast on YouTube. He did not post a single inspirational meme on Instagram.

Some consider these modern social media huge time wasters that lead to increased feelings of anxiety and isolation. Others consider them important tools of communication that can connect people and provide access to information. No doubt they are a bit of both.

Either way, Newman achieved all his success as an evangelizer without any of them. He formed connections with people and conveyed the gospel message admirably without YouTube, Facebook, Blogs, Vlogs or Twitter. How did he do it?

Cardinal Newman’s personal motto was Cor ad cor loquitor, which means “heart speaks to heart.” Newman believed that this was the best way to spread the gospel — one heart at a time. He believed in making personal connections, which is why he wrote so many letters. He knew that the best tool to use to light someone’s heart on fire for Jesus was for his own heart to be on fire for Jesus. There simply is no substitute for that kind of personal, authentic witness of the faith. There is no substitute for a living, loving relationship.

In short, how can you convince people that God loves them, if they don’t see that you love them?

I’m not saying that modern tools of communication are bad. I realize fully the irony that I’m writing this in a blog post that links to a YouTube video. Modern social media have their uses. But they are not sufficient. The only thing that can truly communicate with a heart is another heart. Newman knew that.

As ministers and students involved in campus ministry, as we evaluate our evangelization efforts, let’s remember that the attractiveness of our web site or Instagram feed is not nearly so important as the attractiveness of our hearts. As good as all these information platforms are, there is simply no better medium for conveying the love of Christ than true friendship.

St. John Newman — pray for us!