TWENTY-EIGHTH SUNDAY IN ORDINARY TIME (B)
click here for readings 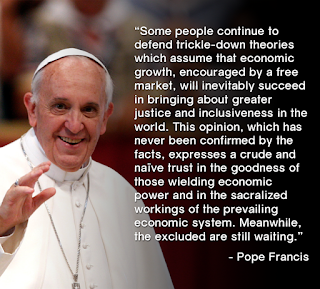 Earlier this week I had the privilege of attending a talk given by two economists, one Catholic, one Protestant, on the topic of whether free market economies are compatible with Christianity.  Pope Francis has criticized the negative aspects of capitalism, and some of these criticisms were addressed during the presentation, including the oft-quoted passage from Evangelii Gaudium at right.

Does Christianity endorse the ownership and free exchange of private property?  On the one hand we have the example of the first Christian community described in Acts 2:44 as having “all things in common,” selling their property and dividing it evenly among themselves according to need.  On the other hand we have the prohibition in the Ten Commandment against stealing (Ex 20:15), which presumes and affirms the right to private property.

The presenters at the talk highlighted the good that has been brought about by free market economies, most notably the overall reduction of poverty and the increase in beneficial goods and technologies including medical advances.  They made the argument that a free market economy is the best way — or at least one good way — to love your neighbor and minister to the poor and hungry, as Jesus commands.

If that is the case, then why does Jesus seem to have such a problem with wealth?  In this Sunday’s gospel reading (Mk 10:17-30), Jesus tells the rich man to, “Go, sell what you have, and give to the poor and you will have treasure in heaven; then come, follow me.”  We are told that the man went away sad, because he had many possessions.  Why was it so hard for this man to do the one thing Jesus asked him to do?  Why does Jesus say that it is “easier for a camel to pass through the eye of a needle than for one who is rich to enter the kingdom of God?”  Is money truly the root of all evil?

In showcasing the benefits of the free market, the economists focused on earthly goods — things such as food, land, money, housing, medicine and all the other things we human beings may need or desire to help us along in this world.  The Church is also concerned with earthly goods.  She wants to make sure, as a matter of justice, that the hungry are fed, the naked are clothed, the homeless are sheltered and so forth.  But the Church is primarily concerned with spiritual goods.  Earthly goods are temporary and fleeting, whereas spiritual goods are eternal.  So the Church rightly teaches that earthly goods ought to be at the service of spiritual goods.  Elsewhere in the gospels (Mk 8:36), Jesus asks, “What shall it profit a man if he shall gain the whole world and lose his soul?”

This distinction between earthly and spiritual goods is the key to understanding this Sunday’s gospel.  The rich man has not sinned simply by being rich.  Indeed, we are told that he has kept the commandments his entire life.  Moreover, he’s asking the right question (“What must I do to inherit eternal life?”) and asking the right person, Jesus.  By all appearances he’s well on the way to sainthood!  In fat, Jesus tells him that he lacks only one thing — and no, it is not simply to sell all that he has.  He must sell all that he has and follow Jesus.  In other words, given the choice between his wealth and his Savior, the rich man chose his wealth.  He valued earthly goods above the greatest spiritual good of all.  Therein lies his fall.

People say that money is the root of all evil, but this is a misquotation of 1 Tim 6:10, which actually reads, “the love of money is the root of all evils.”  It is the disordered love of a lesser good over a greater good which corrupts.  Rather than condemning wealth per se, St. Paul instructs Timothy on how to advise the rich.  “Tell the rich in the present age not to be proud and not to rely on so uncertain a thing as wealth but rather on God, who richly provides us with all things for our enjoyment.  Tell them to do good, to be rich in good works, to be generous, ready to share, thus accumulating as treasure a good foundation for the future, so as to win the life that is true life” (1 Tm 6:17-19).  In other words, the rich ought to use their earthly goods at the service of the spiritual good.

It has been observed that the most generous people tend to be those who have little.  The homeless man who has two dollars freely gives half of his wealth to his friend so that they can both enjoy a sandwich.  Meanwhile the corporate CEO donates 1% of his income to charity and makes sure that a flattering press release is issued to improve his public image.  The CEO may have donated a higher dollar amount, but the homeless man has gained more treasure in heaven. 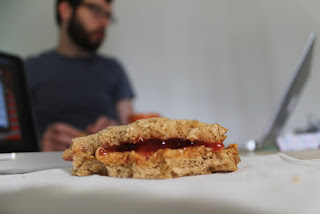 I wish the speakers at the talk I attended had mentioned spiritual goods — but they are economists, not theologians.  Using the lens of spiritual goods, I would argue that a free market is compatible with Christianity for the simple reason that it is free.  Two scenarios will illustrate my point.  In each, I have two sandwiches and my hungry neighbor has none.  In the first scenario, in solidarity with my neighbor and out of love for him, I give him one of my sandwiches to eat.  In the second scenario, a man with a gun tells me, “I see you have two sandwiches and your neighbor has none.  That does not seem fair.  Give him one of yours.”  I comply out of fear of punishment.

In terms of earthly goods, both scenarios seem to have the same result — my neighbor and I each have a sandwich to eat.  In fact, one could argue that the second scenario is the more reliable way to ensure everyone gets a sandwich, because it is not dependent upon on my free will choice.  But from the perspective of spiritual goods, the first scenario is superior.  By freely choosing to share a sandwich with my neighbor I have engaged in an act of charity.  I have grown in love, and thereby grown in holiness.

Freedom is a prerequisite for love.  This is the answer to the perennial question, “Why is there evil in the world?”  It is because the same free will that allows us to do great evil is the only thing that allows us to love.

Jesus is, of course, correct when He says it is hard for the rich to enter heaven.  The more wealth you possess, the greater the risk that it will come to possess you.  Greed can make you a slave to your wealth, just as every sin can make you a slave to something less than God.  But greed and generosity have more to do with the size of your heart than the size of your bank account.

Wealthy or not, we all face the same choice Jesus offers the rich man.  Stay bound to your treasure on earth, or bind yourself to Christ and gain eternal treasure in heaven.