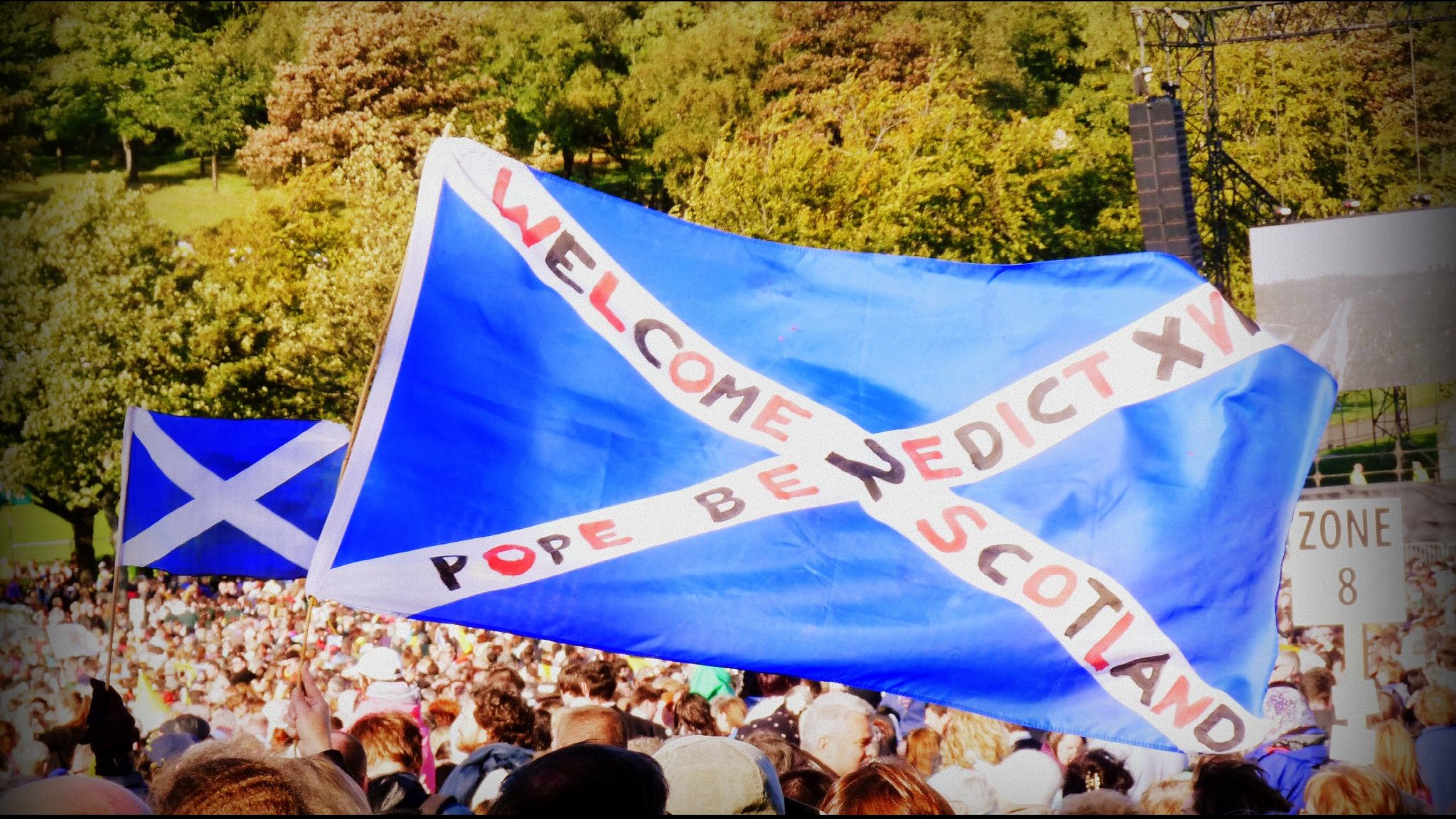 So What Does the Pope’s Visit to the UK Have to do With WCU?

Many of you know that in addition to being your friendly neighborhood campus minister, I also earn a living as a kiltmaker and as director of the Scottish Tartans Museum in Franklin, NC. Get to know me and you’ll discover that I’m a big Scottish Highland Dress buff – in fact I’ve written books and numerous articles on the subject and hold various honors in the field. I actually started working part-time at the Scottish Tartans Museum (the only such museum outside of Scotland), while still a student at WCU myself. I’m very proud to now serve as its director.

I am also currently the only American member of the Board of Governors of the Scottish Tartans Authority, an organization based in Perthshire, Scotland, dedicated to promoting Scotland’s tartan weaving industry and heritage. (Tartans are what we would call plaid designs, typically seen worn in a kilt, which in Scottish tradition represent clans, families, places, etc. and denote affiliation).

So what does all this have to do with Benedict XVI’s upcoming trip to the UK? When His Holiness arrives in Great Britain, he will be first received by Queen Elizabeth II at Holyrood Palace in Edinburgh. The Scottish Catholic Bishops wished to celebrate this historic occasion by commissioning a new tartan design. As Benedict will arrive in Scotland on Sept. 16, the feast day of St. Ninian, the earliest Christian missionary into Scotland, they wanted to call it the “St. Ninian tartan.” The Scottish Catholic Media Office approached the Scottish Tartans Authority with the idea.

This is where your intrepid campus minister gets involved. Brian Wilton, director of the Scottish Tartans Authority, phoned me up. I had designed several tartans in the past for private clients. He knew I was a staunch Catholic and worked in campus ministry. Would I be willing to submit a few possible designs for the St. Ninian tartan? How could I refuse!

With much excitement I set to work, researching St. Ninian, learning about the papal visit, the Catholic Church in Scotland, and coming up with three different tartan designs which I felt represented the spirit of the occasion. In the end, one of my designs was selected to be the official tartan chosen by the Church.

I was thrilled, as you may imagine. However, I was even more excited to receive a phone call from the Catholic Media Office in Scotland, offering to fly me over to be present at the formal unveiling of the new St. Ninian tartan on Sept. 9, at the Scottish Parliament building, before several Members of the Scottish Parliament and Cardinal O’Brien, president of the Scottish Catholic Bishops Conference. I truly am honored, and to be perfectly honest, it still doesn’t seem real to me. However, the tickets have been purchased and confirmed. I’m flying over to Glasgow on Sept. 6.

The Scottish Catholic Media Office’s generous offer to fly me over is also allowing me to take advantage of another opportunity. I had previously been awarded a grant from the Scottish government to tour various tartan manufacturing facilities and museums where collections of historic tartan textiles are housed. This was in order to aid my work at the Scottish Tartans Museum. The grant was to cover my travel expenses while in Scotland, but not the flight over. So I am very blessed to have this double opportunity.

One of the major reasons for Benedict XVI’s visit is to canonize John Henry Cardinal Newman, famous English convert, theologian and educator. He is somewhat of a patron for Catholic Campus Ministry, with campus ministry houses across the English speaking world named “Newman Centers” in his honor. The Pope will be giving several talks underscoring the importance of education while in the UK.

Though the tartan I designed is named after St. Ninian, Cardinal Newman’s canonization is commemorated in the tartan by the inclusion of red and white stripes – taken from the color of Newman’s coat of arms.

So this trip is very much imbued with meaning for me, and provides me with a rare opportunity to combine both my passions for Scottish Highland dress traditions and for helping college students grow in their Catholic faith.

I will be gone from Sept. 6 to Sept. 17. Please pray for me during that time, for safe travel and safe return home.